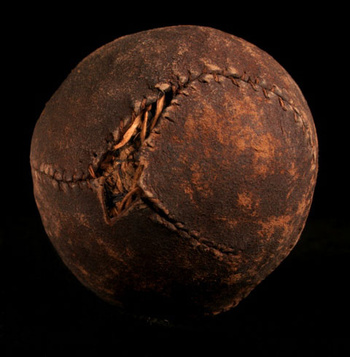 This primitive handmade ball came out of eastern Massachusetts and was likely used to play an old form of baseball called town ball. The 19th century was a time of rapid evolution for baseball and the game varied according to region. Town ball was the variant of base ball that New Englanders preferred thus it was known as the “Massachusetts Game”. Eventually the New York Game won out as organizer’s looked to standardize the sport. Many former town ball players often reflected fondly upon the Massachusetts style of play, simply calling it the “Old Game”.

Town balls were typically smaller than baseballs. This example measures just 2 ½ inches in diameter and features a hybrid stitching pattern. Upon examination it appears that the maker intended to construct a figure eight design. However, as the final run of stitches were coming together an excess of leather must have started to bunch up or “dog ear”. To compensate for his miscalculation, the maker needed to cut out a wedge as a way to eliminate the extra leather. By removing this wedge, an additional leg of stitching became necessary for completion. As a result, the ball also became part “lemon peel” in construction.

The open seam on this rare and unique artifact provides us a peek into the inner composition of yarn and twine. 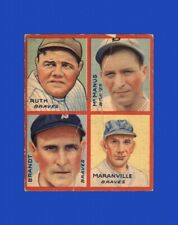 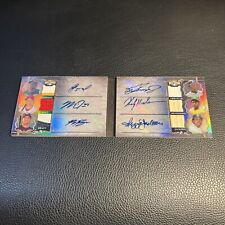