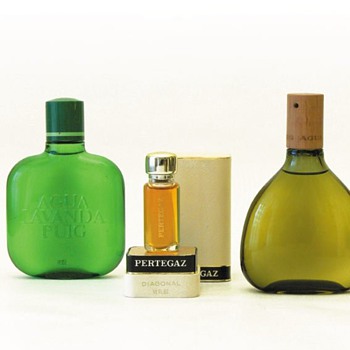 Well, these are not Art Glass but mere industrial design, but I quite like them.

The three of them were designed by the Spanish designer André Ricard, my favourite designer ever) for the Spanish perfume company Antonio Puig.

The first bottle, the green one, is a design from 1975 for AGUA LAVANDA. This bottle is a new one, what you can see by looking at the striped stopper, but I've got some original bottle in my Ricard collection. The second and smallest one was made por the Pertegaz eau de cologne DIAGONAL (I seem to remember from 1975 too), whereas the third one was a revolutionary design in the Spain of the early 60s. It was originally created for Agua Lavanda and the design included not only glass but raffia and a wooden stopper. With them Ricard intended to use tradit¡onal materials in an innovative design. I guess that at some point this bottle was too expensive for a cheap -but good- product as Agua Lavanda, so in 1968 they decided to use it for a new man's fragrance, AGUA BRAVA... This bottle is still in production today after almost 50 years (43 of them as the Agua Brava bottle).