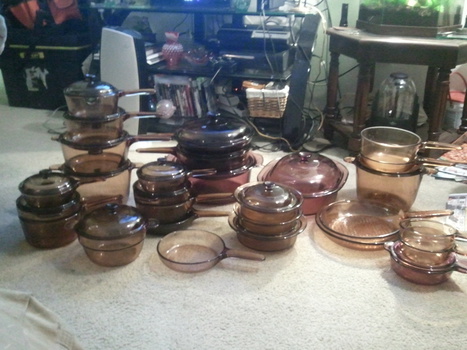 corningware started making "pyroceram" 1952. then in 62 hey began work on developing a completely transparent cookware (instead of the solid white) the first visionware was marketed in france in the 70s, and is clearly marked "france" after three years of sales in usa it was estimated to be in at least 30% of homes; and became one of the hottest houseware items in the 80s. just as corning was starting a new manufacturing plant in brazil, dedicated solely to production of visionware (in 88) sales showed signs of being a fad, and by 89 (year i was born) sales plummeted and they scrapped the plant and it became "a costly write off". with exception of 4 pieces this is almost a complete set