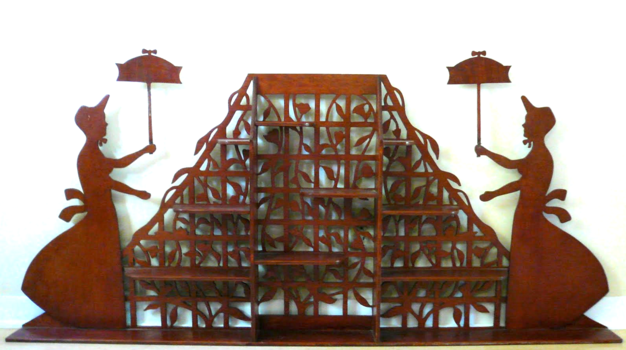 Plywood is now officially an antique, thus making those beautiful early Eames chairs for Herman Miller no longer "modern" but "old" and they can be moved from the cool wing to the brown wing in decorative arts museums. Don't get me wrong...there are few things more beautiful than a molded antique piece of plywood made by Herman Miller. But "modern" is finally a misnomer. I am really sorry nothing as "modern" has come along since.

Shown here is a wall-sized plywood nick-nack holder from hell. There seems to be about twelve feet of shelf space. A jigsaw jungle of overdone, obsessive eccentricity. This monster is literally as big as a wall. I picked it up (with help) in an antique mall. I have NO idea what the maker was doing, but I believe either junior or the wife had to help slide the sheet of wood around as he cut it out. Certainly no one has spent this much time in the garage since they invented television.

I recently found a really nice type of plywood. It is a composite, but rather than crushed particles, the wood is half an inch thick and each piece molded together is about ten inches long. It even has tiny machine cut dovetails cut into it so the wood fits together for added strength. I turned it into a desk-top, unfinished...and it looks really modern.

The monster umbrella girls go in the basement, where they will await the next garage sale. I'll price them really high, but will negotiate.