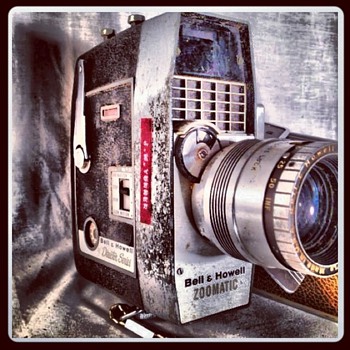 This specific camera in my collection holds signifigance due to the fact that it is the same model camera that caught video of JFK's assasination.

Bell & Howell Model 414 Director Series Zoomatic Movie Cameras (early 1960s) There were similar models with subtle differences. The model 414 did not have power zoom or a dual electric eye. The model 414P had power as well as manual zoom. The model 414PD had both the power zoom and the dual electric eye. They also came in either roll film models or magazine load models. They do not have the model numbers on the camera. My serial numbers: Model 414- AF2131, Model 414P- AP15678, Model 414PD- AS22773. The Models 414P and 414PD look identical except he 414PD says near the viewfinder "Dual Electric Eye" and has an additional small meter sensor at the bottom - center of the large meter. The power zoom controls on the 414P and 414PD are the two buttons on the top. The single electric eye model had one Selenium cell which measured overall scene illumination. The dual electric eye model had an additional selenium cell which sensed "paraxial luminance for backlight compensation." Roland J. Zavada, Dissecting the Zapruder Bell & Howell 8mm Movie Camera. If a model has magazine load, it says so directly under the Zoomatic label. The film in all models is advanced by a spring motor. The large lever on the side is used to wind the spring motor. The spring motor also apparently powers the power zoom. There are no batteries. All three cameras have a Bell & Howell Varomat Zoom Lens, f1.8. It zooms from a 9mm focal length to a 27mm focal length. The cameras have a built in Type A filter that allows use of indoor color film outdoors. The viewing was not through the lens reflex. The viewing window was coupled with the zoom lens however. In other words, you would see the zooming in or zooming out. This was more sophisticated that some other cameras of the era, such as the Kodak Cine Zoom Camera below, which simply had wide, normal and telephoto frames on the viewing window. Film speed was from ASA (ISO) 10 to 40, very slow by today's standards. The cameras used 8mm film. This was apparently 16mm film folded in two. One side would be used. The spool was then flipped over. You would then film with the other side. The film would be cut and joined when processed.

The model 414 Director Series camera would be an interesting, although not exceptional, camera from the early 1960s. What makes it perhaps the most examined movie camera model ever, however, is that the most revealing film of the John F. Kennedy assassination on November 22, 1963 was taken with a Bell & Howell Model 414PD (roll film) Director Series camera by a Dallas dress manufacturer Abraham Zapruder. The 28 seconds of film includes the precise moment when the fatal bullet struck the president. Several sites discuss the camera including Abraham Zapruder 8MM JFK Assassination Camera, 1963, Abraham Zapruder Camera (includes owners manual), Roland J. Zavada, Dissecting the Zapruder Bell & Howell 8mm Movie Camera, The Bell & Howell Model 414PD 8mm Movie Camera Image Capture Characteristics. 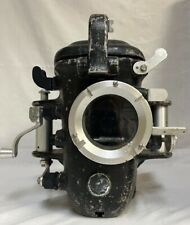 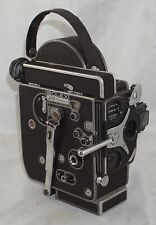 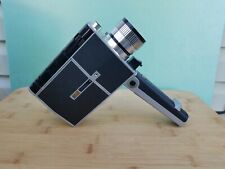