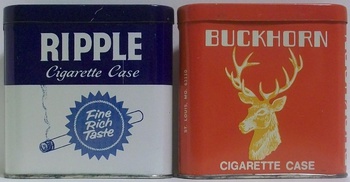 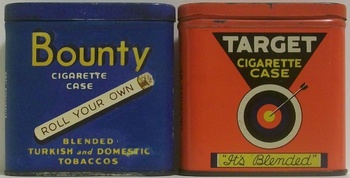 Here is a bunch of Cigarette Pocket Tins. Compared to the most common pocket tins these are almost half as high. What is unique about these tins is that they were sold empty of any tobacco products. When smokers started to use pipe tobacco to roll into cigarettes before the days of factory made cigarettes, these tins were included with the “Roll your own cigarette kits”. A smoker could, at their leisure, roll a whole bunch of cigarettes and fill one of these tins with about 20 cigarettes. So when the need arose to smoke one but the situation or time did not allow rolling your own, you had a stash all set to light up with.

The 1st photo we have 3 variations of the Bugler brand and probably the most common found. The lighter blue one with the shiny gold bands is the rarer one. The gray band one is probably a mistake missing the beige bands which replaced the gold bands with the later type. The second most common of these is probably a toss up between the Buckhorn and the Target brands. The Ripple brand comes in third hardest to find. I believe the least common brand is the Bounty.