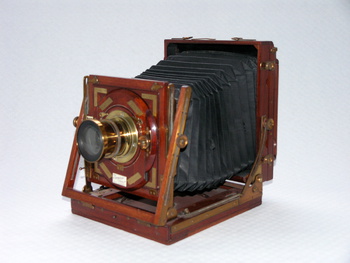 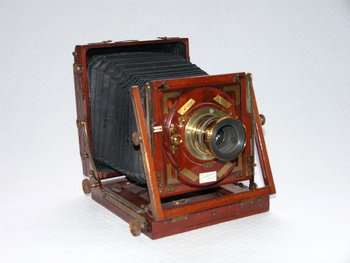 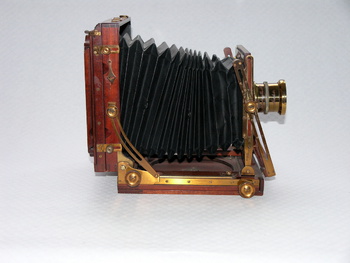 Dating to C.1896, this Sanderson camera is as perfect an example of the camera maker's art as you will ever see. F.H. Sanderson patented a design which incorporated flexible but easily clamped multi movements of the front and back panels, mainly for his own interest, which was architectural photography. He made some prototypes himself, but soon passed bulk production to Holmes Brothers for marketing by George Houghton & Son, who absorbed their firm in 1904.
Note: Bulk production does not and did not mean Mass-production!
As someone who would like to have been a craftsman, I am deeply in love with the brass inlay on this camera; you can see it is there, but your fingers can't feel it is there if you run them over it. As near perfection as it gets, the "A" Pattern was superseded in 1899, by the somewhat less ornamental, but rather more practical Hand and Stand Sandersons.