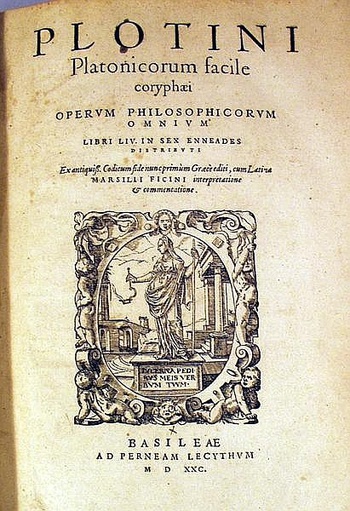 Condition/Details: Bound in full leather with raised bands and gilt lettering to spine, this antique folio volume is a rare first edition of the Enneads in the original Greek, edited, with Latin translation in parallel columns, by Marsilio Ficino.

"The Six Enneads" is the collection of writings of the Greek philosopher Plotinus (ca. 204-270), edited and compiled by his student Porphyry (c. 270 AD). Plotinus was a major philosopher of the ancient world who is widely considered the founder of Neoplatonism. His work, through Augustine of Hippo, and therefore subsequent Christian and Muslim thinkers, has greatly influenced Western and Near-Eastern thought.

The work is illustrated with a woodcut portrait of M. Ficino. This work was printed by Pietro Perna (1519 - August 16, 1582), the leading printer of Late Renaissance Basel, the Erasmian crossroads between Italian Renaissance humanism and the Protestant Reformation. His books promoted the Italian heretical thinkers at the origins of Socinianism and the theory of Tolerance. He was a major publisher of Protestant historians like Flacius Illyricus and David Chytraeus and promoted the ars historica treatises of the period, notably the 18 authores de historia in Artis Historicae Penus (1579).