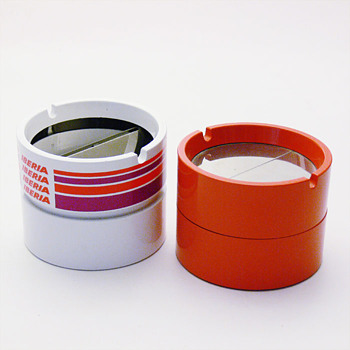 Another Ricard ashtray model that's made entirely of metal. In fact they're just two of them.

This one is one of those mechanical ashtrays so trendy around 1970. It's very nice, heavy, and easy to use.

As you can see on the picture, the ashtray's main body is divided into two simmilar halves. the one on top can be lifted and when you do so, the flat surface -also divided in two- opens (just like you can see it happens on the white ashtray). So when you smoked, you just let the ashes lay on top of the astray top and once over, you would just take the ashtray holding it from the top half of it. Then, the flatsurface would open and the ashes would fall inside. Easy as that!

Jus like it happened with the other Flamagás ashtrays, they were sometimes used as company gifts... in this case the white one has been printed with the logo and corporative colours of IBERIA, the Spanish airlines.

As for colours, have just seen three: orange, white and black.