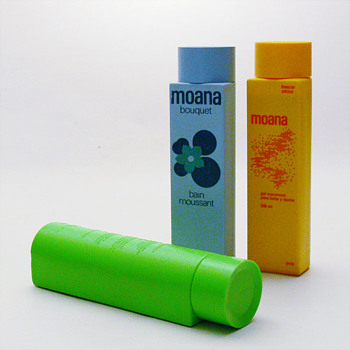 One of the things we can say about about Ricard is that he's been working regularly with a few good companies. He did for almost 10 years for FlamagĂĄs, and he did for almost 50 for Antonio Puig, which I'd say is the No.1 Spanish company dedicated to perfumes and cosmetics.

What we can see here is a shape designed in the mid 60s- I know that the graphics for the blue one comes from around 1975 and that of the yellow and green one must come from the late seventies, as in 1981 Ricard redesigned the bottle. The original graphics from the 60s involved merely the lettering that, depending on the three varieties (cedar, citrus, fugĂ¨re), came in different colours matching thaose of the caps.

I quite like this design. As most of Ricard's work, it departs from the simplest, most elemental shapes. I love the way the stopper combines with the body and its flat side, which proves to be pretty useful not ony for printing, but also for standing on it (once there's few gel on it... we all know about what happens when we're running out of it! :) ) as well as for us to grip it.

Of course, I also remember using this and liking its shape. I guess I was about 6 or 7 at the time.

By the way: I purchased these from the online shop of a smalltown store. It was amazing they would be selling this but, don't worry, just in case I don't intend to use it...