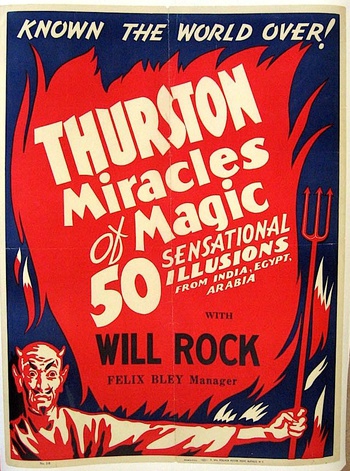 This is an original 1940 poster from my private collection of Magic posters. It measures approximately 21" x 28" and is "A" condition. This particular poster is one of the rarest Will Rock-Thurston posters from the time, only a few have surfaced. This is just 1 of a handful of different posters that promoted magician Will Rock's presentation of the "Thurston Show", which he performed from 1938 through 1942 after purchasing Howard Thurston's magic show.

Will Rock (William George Rakauskas) was born in Lithuania and came to the U.S. in 1912, he became a magician in 1920 and was The Great Raymond's assistant for 3 years before he hit the road and toured himself playing 300 cities in a four year period. Rock's show ended when the war started and he joined the Army.