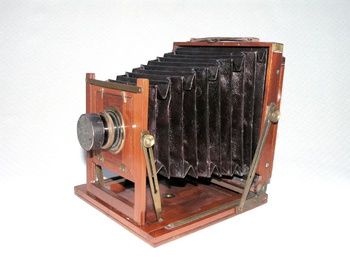 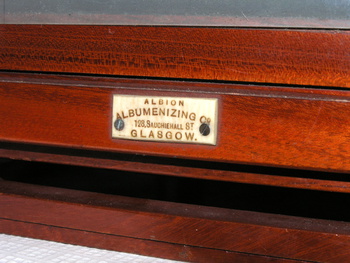 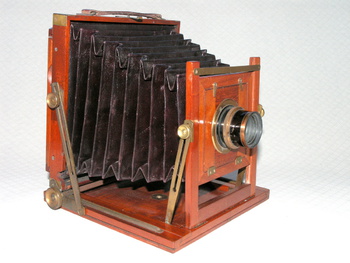 Albion Albumenizing Co.| Tourist | Field Camera | 1896 | Half Plate.
Catalogue No. 0186.
An example of a firm that adapted as well as it could to changing circumstances in the tough and highly competitive photographic products field of the 19th century, the Albion Albumenizing Co. was in 1870 the biggest producer of albumenized paper in the UK., but during the albumen period, work continued on alternative means of securing a paper image and in 1871 the writing appeared on the wall for Albion, when Dr. R L Maddox published a method of using an "emulsion" of silver bromide bound in gelatin. By 1879, large scale production of silver bromide gelatin paper was possible by more modernised firms, and by 1885 Albion had turned to the production of cameras such as the above; cameras subsequently became their prime product, but by 1906, they were describing themselves as Mount Makers, and by 1913 they seem to have closed down.
Established in 1864, made cameras from 1885 on, moved in 1896 to the address on this camera, 128, Sauchiehall Street, Glasgow, so it is dated to 1896, but looks earlier. Two models, the “Tourist” and the “Serviceable”, were produced. The slender and light weight build suggests that this is the “Tourist”; it is the slimmest W&B Half-plate camera I have seen, with a folded thickness of only one and three-quarter inches (4.5cm.). Lens panel held upright by pegs in slots. Double extension by gearless pull-out front. Tailboard style rear body focusing, moved by rack and pinion.