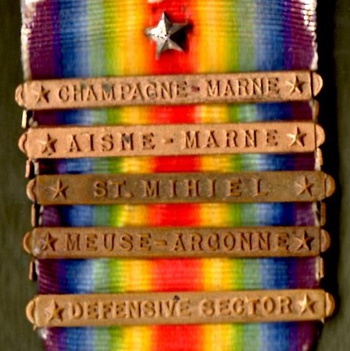 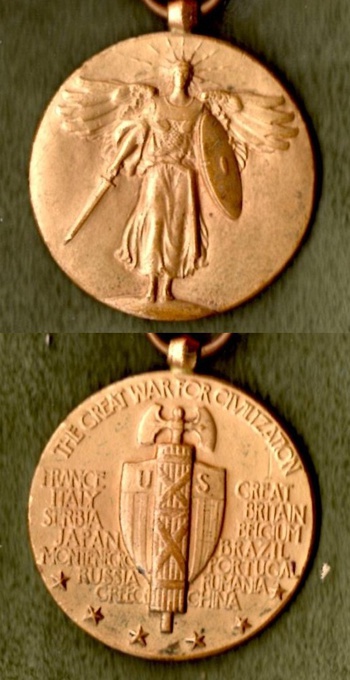 I saved this Victory medal for last for a couple reasons. First, because it’s also a gallantry award. Secondly, last year I gave the British Empire and its commonwealths the place of honor in recognition of their greater sacrifice, measured in lives, starting in 1914. This year I’m going to give in to my patriotic impulses and display an American medal this Armistice Day.

This US Victory medal has battle clasps consistent with the unit histories of the 26th and 42nd Divisions. The 26th “Yankee” Division was formed from guard units in the New England states, and was the first National Guard division to go to the front. The 42nd “Rainbow” Division was composed of guardsmen from twenty-six states that hadn’t yet committed National Guard units, and arrived in France in November 1917. As you can see by the number of battle clasps, both divisions saw quite a bit of action.

This victory medal features a silver citation star, which was awarded for individual gallantry in action. It’s comparable to the “Mentioned In Dispatches” emblem authorized to be worn on the ribbon of the British Victory Medal. To be eligible, the citation had to be issued at General Officer level, it must have been for gallantry in action, and the Medal of Honor or Distinguished Service Cross must not have been awarded. In the 1930s, the Silver Star Medal was established in place of the Silver Citation Star.

Of course, all the WWI Veterans are gone now, but there are still heroes among us. On veteran’s day I think the reader will indulge me if I digress. This morning I was privileged to witness two veterans being inducted into our local VA Hospital’s Wall of Heroes. Not only did these two gentlemen serve honorably in WWII, but since then over the years have devoted a combined 20,930 volunteer hours at the Veterans Hospital and USO, helping returning service personnel and their fellow veterans.