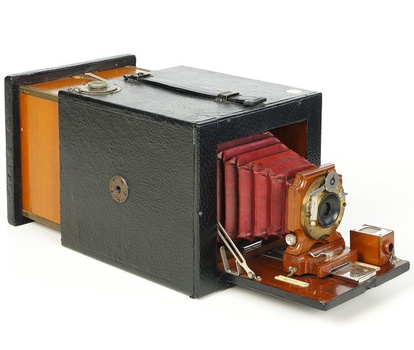 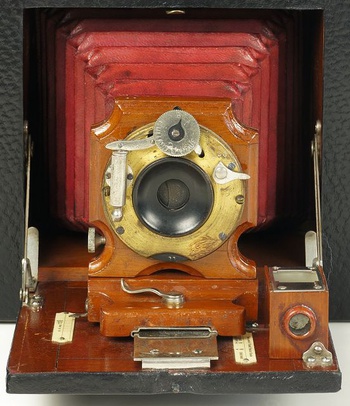 This is the second camera in my 1997 "Milwaukee parking lot acquisition" story that started with the Henry Clay Camera posting. Upon concluding negotiations (which included lots of arm waving, odd gestures, and so forth), I also came away with this rather unusual and scarce c.1898 Bullard Folding Magazine Camera.

BTW ... one of the downfalls of acquiring these two cameras was that the owner was a cigar smoker. Both this camera and the Henry Clay really smelled bad ... I'm talking about curl your nose stench to the extent that my hotel room started to smell. So before bringing them home, they were sealed in plastic bags. All-in-all, it took about 3 months for the cameras to 'air' (so to speak).

The Bullard Company was founded in 1895 by Edgar R. Bullard and began operations at a time when the public was getting excited about less expensive roll film cameras. It was a short-lived enterprise that eventually sold out to another company in 1901 or 1902. This folding magazine camera was a competitive attempt to make changing plates almost as easy as roll film exposures. The design worked by allowing successive exposures to be made on 18 pre-loaded 4 x 5 dry plates. The push-pull action of the back would position a fresh plate for the next exposure.

Advertisments had tag lines such as "It's Better Than Yours" and "The magazine works with the speed and accuracy of a repeating rifle."

Really!? ... hmmmm ... since this camera came with most of the original plates and sheaths, I thought to give the changing magazine a try.

Considering the test results, it is not hard to imagine why this novel design met with limited success. Although I could get the magazine to work, it jammed quite frequently, leading me to wonder about the quality of those 19th century repeating rifles.