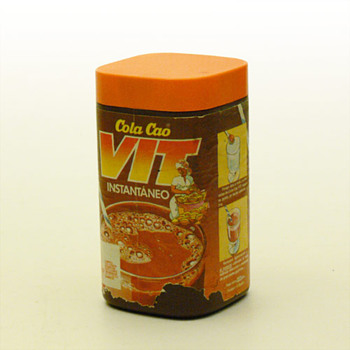 Ok, I admit it: this is one of the weirdest things I've been wanting to add to my André Ricard collection for over 5 years, and I am happy to say I found it at last! :) What I paid fot it wasn't too much, but it's a lot compared to what I could have paid for it in the market was it still into production.

When I was a kid there were two main brands for breakfast Cocoa: Cola Cao (produced by the Spanish brand Nutrexpa), that was delicious but if you didn't stir it properly would leave lots of chocolate powder lumps, and Nesquick (produced by the Siss company Nestlé) which wasn't as good but left no lumps at all... Cola Cao Vit was an answer to all those who loved Cola Cao but wouldn't use it because of the lumps... plus it had extra vitamines! They said it was the cocoa powder for the weirdos and their worried mothers. I must have been a weirdo kid... :/

Cola Cao started producing it at the begining of the 80s and they stopped production at the end of the same decade. So my jar is at least 24 years old :)

As I did with other designs from Ricard I loved this one and treasured a few as the perfect box for small toys, etc... I guess that as i was getting rid of those toys I got rid of my Coa Cao vit boxes. Sad, isn't it?

I loved the orange square lid and the contrast with the brown body!!!
It was a great surprise when i found out it had been designed by my design hero!!!