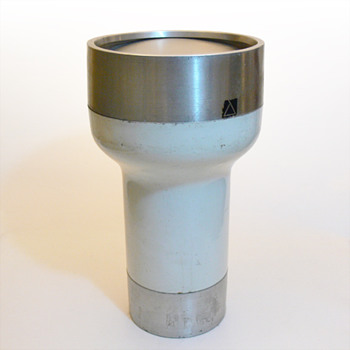 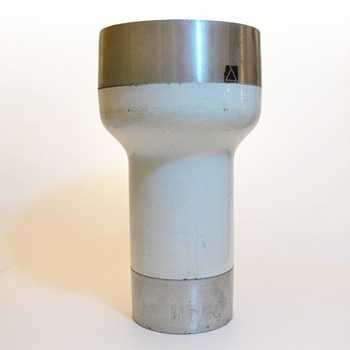 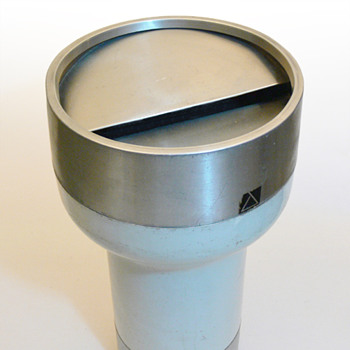 It seems that 1966 was a great year for designes in Spain. If one takes a look at the Delta design awards, the three Delta de oro went to Vicente Sánchez Pablos (for his Balancí rocking chair), Beth Galí and Joan Antoni Blanc (for one of his always amazing lamps), whereas the Delta de Plata went to Miquel Milà (for his planter designed in collaboration with André Ricard), André Ricard (he got two more Deltas de Plata this year: one for his Copenhagen ashtray and other for the packaging for a shirts brand)), Jordi Galí (for the children stool I posted here a couple of days ago -by the way, he's the brother of Beth Galí), Josep M. Martorell, Bohigas & Mackay (for their MBM 2 lamp. which is one of the classics in Spanish design) and Antoni Bonamusa for this floor ashtray.

It is such a bold design! The lines are pretty subtle, but the final result is pretty strong. Not being a smoker I have to say this is the only one of the ashtrays I use regularly... as a waste bin ;) (I have to admit it's been some time since I last emptied it... but there must be all sort of sweet-wrapings inside!)

It became a very popuar design in the Spain of the 1960s and 1970s. I remember seeing it all my life at the entrance and corridors of office buildings, and since smoking indoors in public places has been prohibited in Spain for several years, you can see them in the street now, by the entrance doors of the same building they used to be before.

It has some plumb weight in the base, so it's quite a heavy thing.

Antoni Bonamusa Homs (Barcelona, 1929-2007) was a Catalan architect and designer that's more famous for his movie theatres for the Balañà Group (a couple of them can be seen at this link http://carlesriobo.blogspot.com.es/2010/02/cines-de-barcelona.html), although he worked greatly as an industrial designer: chairs, ashtrays, office equipment, street furniture...) As a funny data, around 1968 he made the urbanism planning for Boca Ratón in Florida.