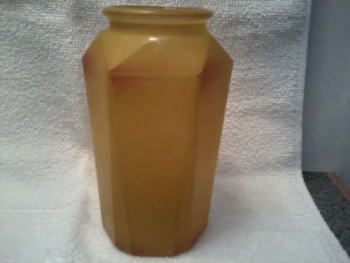 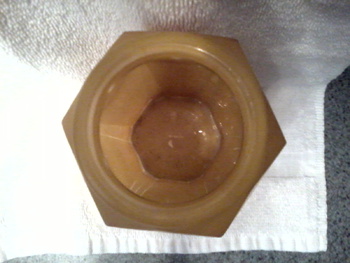 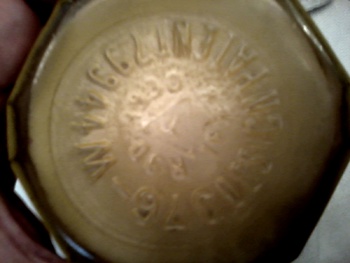 Found this neat little 6 1/2" jar/vase in the bottom of a shopping cart of things waiting to be put out at "Goodwill" It's made by Turner Glass Co. It's marked on the bottom with a design patent number (79944 376-W) and the years 1930 and 1858 I think. The last two numbers are really worn These are around their mark which is an "inverted" triangle with a capital " T " in the middle used from 1905 thru 1930. Also by the mark is the number " R 90 ". It's painted on the outside a really nice peachy yellow with rosy highlights at the six-sided corners. It has some wear and nicks in the paint,but it's so nice it doesn't matter.I can't believe it survived all these years without being broken or chipped.I think it's painted on the outside so you could put water in it or maybe it had something in it at one time possibly something consumable. Maybe peaches ! -Mike-