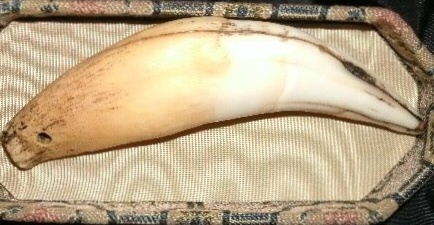 I Bought This at a flea market a few years ago

LIONS TOOTH?
The lion is the largest carnivore in Africa. Lions have 30 teeth, including four large pointed canine teeth which are used to hold and kill it's prey. Lion teeth are symbols of rank, leadership and power in traditional African cultures whose chiefs, kings and high status male leaders wear necklaces of large lion teeth to symbolize their rank and authority in society. Lions teeth have very strong medicine and should be handled and worn with much respect.
I also discovered that the larger of the "canine" teeth average about 4" to 4 1/2" in length.

BEARS TOOTH?
Bear-tooth pendants are interesting artifacts of the Viking Age. Both genuine teeth and bronze imitations were used as pendants. Some 70 items like this are known from the Viking-Age Finland. Bear teeth were supposed to contain magical powers.

The cult of bears may have had a central position within the ancient religion of the northern peoples. The Finnish religion, too, had a multi-part ritual play called karhunpeijaiset (a wake-feast celebrating the killing of a bear and soothing its spirit). Literary descriptions of the bear-soothing wake have been preserved from central and eastern Finland from the 17th century.

The felled bear was borne solemnly into the room where its meat was prepared and eaten. This ceremony included singing of runes and different kinds of rituals. Thus the spirit of the dead animal was appeased. Finally, the scull of the bear was taken back into the forest and placed on the branches of a pine. From there the the spirit of the bear could see into which direction it was to start its wanderings. Sometimes the bear-soothing wake also bore some traces of a wedding-feast, with a girl playing the bear's fiancée. This was probably motivated by the belief that the bear was the forefather of humans and reincarnated after the wedding ritual.