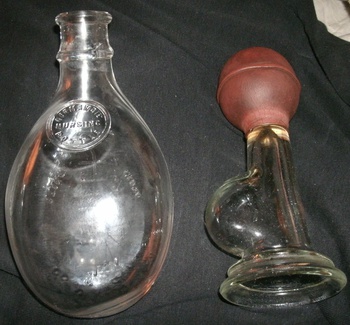 The banjo shaped feeders of the late 1800's were produced in great numbers. Many had sweet sounding names such as 'my little pet' and 'mummies darling' while others were very nationalistic like' The Empire', 'The National' 'The Victorian'. Some simply advertised the chemist from which they were bought but many cashed in on the popularity of the Princess of Wales in the 1880's. Hence the most common inscriptions bore the words, 'The Princess or 'The Alexandria'. However these sweet sounding names often belayed the hidden dangers of these little inconspicuous bottles. The later day nicknames 'The killer' or the 'The murderer' was indeed more apt.

Infant mortality rates were still extremely high even in the late Victorian era, with only 2 out of 10 infants reaching the age of two. Hygiene was often relegated to the point of non-existence, and the hand rearing of babies was fraught with danger.

The bottles were designed with a integral glass tube, and a stopper. Attached to the glass tube there was a length of Indian rubber tubing, which ended with a bone mouth shield and a rubber teat. This design of bottle was impossible to keep clean and even though openly condemned by much of the medical profession of the time, continued to sell well into the 1920's. Much of this popularity was attributed to the fact that the baby could be left unattended to feed, even before the baby was old enough to hold the bottle.

Charles M. Windship of Roxbury, Massachusetts, patented the first United States nursing bottle in 1841...Many nursing bottles of the late 1800's were made to lay flat and a few types were embossed with reminders such as 'Feed the Baby.'