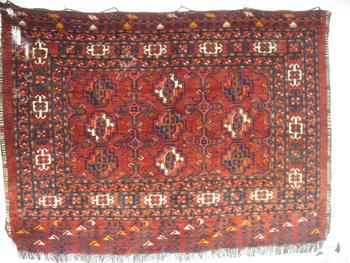 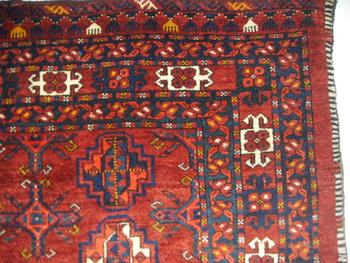 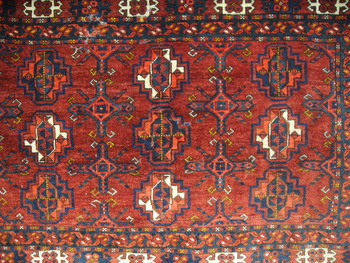 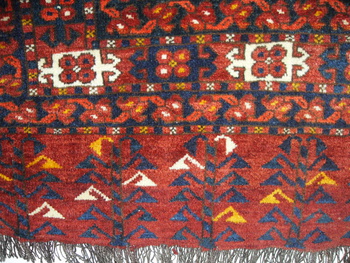 I believe this to be a beautiful example of 19th century Turkmenistan Chuval weaving. Measuring approximately 2 ft. 9 in. by 4 ft. by 2 in. (084 by 127 cm) , it is comprised of cotton used for whites in the pile and the very intense red, orange and blue of lustrous wool. It has motifs including S-Figur/S-figure (capraz), Kamm/comb (tarak) and Haken/hook (kivrim).

Rugs have been woven for centuries in "Turkestan," the area east of the Caspian Sea, north of Iran and Afghanistan, and west and southwest of Chinese Mongolia. The old silk road from Baghdad to Tehran to Ashkhabad, Samarkand, and Tashkent bisects this territory, and was traveled by generations of traders carrying goods between China and the West. The route became known to Europeans following Marco Polo's exploits, and by the early 1800's there are travelers' tales of the people living here.

This is rugged territory, with the Kara Kum Desert hard against the Caspian Sea in the west and the Kizil Kum Desert north of Bukhara tailing off into the high elevations of the Hindu Kush and the Pamir mountains. The landscape is often bleak, windswept, and arid, with heat in the summer and punishing cold in the winter. The population density is low, and the people are pastoralists rather than farmers. Until very recently most people were are least semi-nomadic, traveling a fixed route with their sheep, goats, horses, and camels that took them down into sheltered valleys in the winters and back up to better pastures in the mountains in the summer. These people were incredibly self-sufficient. They used the leather and wool their animals produced to completely equip themselves with clothing, tents, and the assorted gear it took to setup and move camp five or six times a year. Among the items they learned to make and to trade to the outside world were very distinctive wool rugs.

Almost all the trade in Turkoman-style rugs these days is through Iran, Afghanistan, or Pakistan. Many of the Turkoman-style rugs we see in the bazaar markets in Pakistan may well have been woven in Turkmenistan or southern Uzbekistan, and brought south over the old trade routes.

Any and all information petaining to this item is welcome. 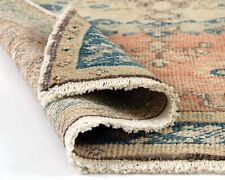 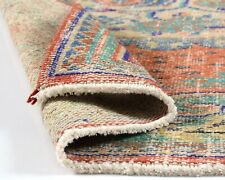 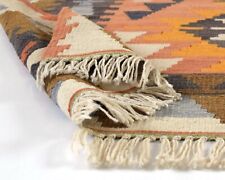