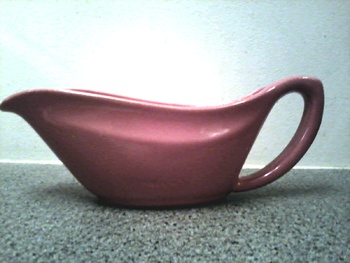 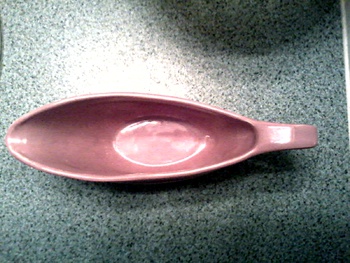 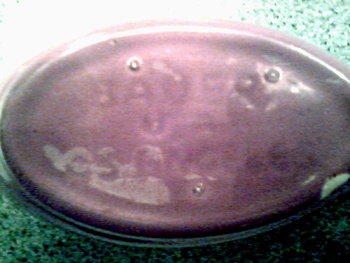 I kind of forgot about this little "Cally" piece. It's been sitting on the dining room table for a couple of weeks. Not so glamorous as my previous posts .It's a "sauce/gravy" boat by Bauer Pottery of Los Angeles USA . I believe the pattern is called "Aladdin"( looks like a genie's lamp) from the 30's or 40's. At 11" from spout to handle it is quite large. It's done in a nice "dusty rose" color. There is one big glaze miss on the bottom by the handle but no other damage. -Mike-

Bauer Pottery is one of the more, if not the most, collected of the California potters. Andy Bauer started off his pottery career in Louisville, KY sometime in the late 1800's. In 1909 Andy moved to Los Angeles, California and became a part of the growing Arts and Crafts movement with an additional pottery manufacturing facility. In the 1940's he opened another plant in Atlanta Georgia. They used marks including "Bauer" and "Bauer Los Angeles" in the 20s and earlier and "Bauer Made in USA" or "Bauer USA" on pieces produced in the 1930's. The company is most well known for the "Ringware" line but all of their pottery is collectible. Only about half of the wares are marked. However, a dealer or collector familiar with Bauers' work can identify them easily.