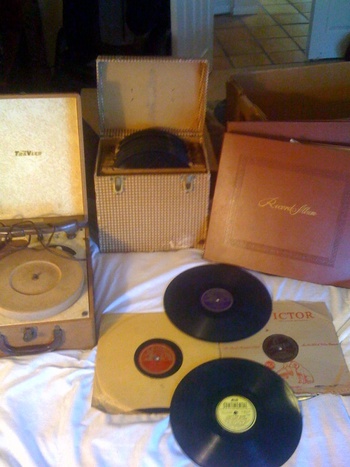 Private collection of the famed Dean Benedetti. He first heard Dizzy Gillespie play the music of Charlie 'Bird' Parker in 1945. Dean was an educated saxophone player and recognized the genius and newness of the sounds he was listening to. The year the war ended was the year Dean's new journey had begun. He loved jazz music and was excited to be part of this era of change. Knowing that CP was doing something timeless, in 1947, he went to clubs and recorded the solo playing of CP. He purchased records showcasing Charlie Parker whenever he could. Almost every record in this collection has CP in some part of the ensemble along with notables such as Gillespie, Roach, Brown, and more. On various labels such as: Savoy, Dial, Apollo, Continental, and RCA; these 78s are cared for and were in storage since his death in 1957. He spent years recording live performances of Charlie Parker whenever he could. The prescient recordings of this jazz master were discovered, published and released in 1990 by Mosaic Records. These records tell about an interesting time in music and American History.