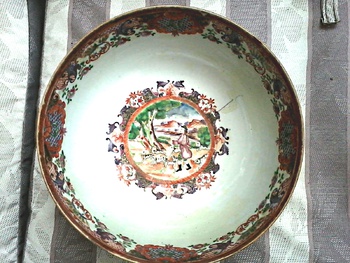 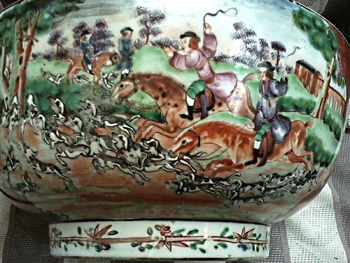 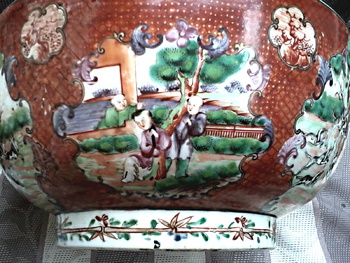 The verdict is in ..... Yes it is a real 18th century Qianlong Dynasty (A.D. 1736—1795), Chinese export punch bowl ! It's had some very old restoration and repaintng so it's value is greatly diminished. Below is the assessment from the "Asian Art" forum. His advice basically was, just keep it and enjoy it for what it is. A piece of history. I'm a bit disappointed but elated at the same time that it is real. To hold something in your hand that is well over 200 years old is amazing ! So on with the "hunt" for that perfect piece ! -Mike-

Subject:Re: Is this Large Famille Rose Punch Bowl Real or Reproduction?
Wed, Aug 14, 2013
Mike, as Erik has noted, this is an 18th century bowl. The pattern is known to be a popular export of the late Qianlong period. Please see the link below to a Bonhams auction in 2006 where a similar bowl, apparently didn't sell (it also had some restoration). Fortunately, the link also leads to several other bowls in the "hunting" pattern.)
There is no doubt that your bowl has been repaired and repainted in spots. I've seen such restorative painting many times. The discoloration and flaking is diagnostic of age and looks from the amount of yellowing in your pictures to have been done circa the late 19th or early 20th century. The black line in the bottom of the bowl is the crack (or one of the cracks) the paint job was meant to hide. On this point, as glues improved, owners often removed old staple repairs and had restorers re-stick the pieces together and paint over the restoration. Such repainting often was extensive in the attempt to hide the signs of damage.
In the first "extra large picture" damage to the bowl has been over-painted, as evidenced by distortion of the dogs' features. Just compare them to the depiction of dogs on the Bonham's bowls (images are highly enlargeable, so you can zoom right in). Also on your bowl, a crack is visible under the paint, extending to the viewer's right below the center dog. All of the dogs near the crack appear to have been repainted to the detriment of their original features. It is my opinion that the foot may have been restored in this area as well, based on comparison with the Bonham's bowl and the yellowing evident in your photos of the base.
The Second new "extra large" image appears to show original enameling of the woman and children. This opinion is based on stylistic considerations. You might be able to scope out the extent of the restoration by using an ultraviolet "black light", which is a cheaper option that an industrial CT scan. My advice, though, would be to enjoy the bowl for what it is and relish the opportunity to own this pedigreed piece of the past.