Today’s guest blogger is collector Howard Rugg, aka “areliczone,” who makes musical instruments and restores antique furniture in Felton, California. You can find him on Show & Tell. 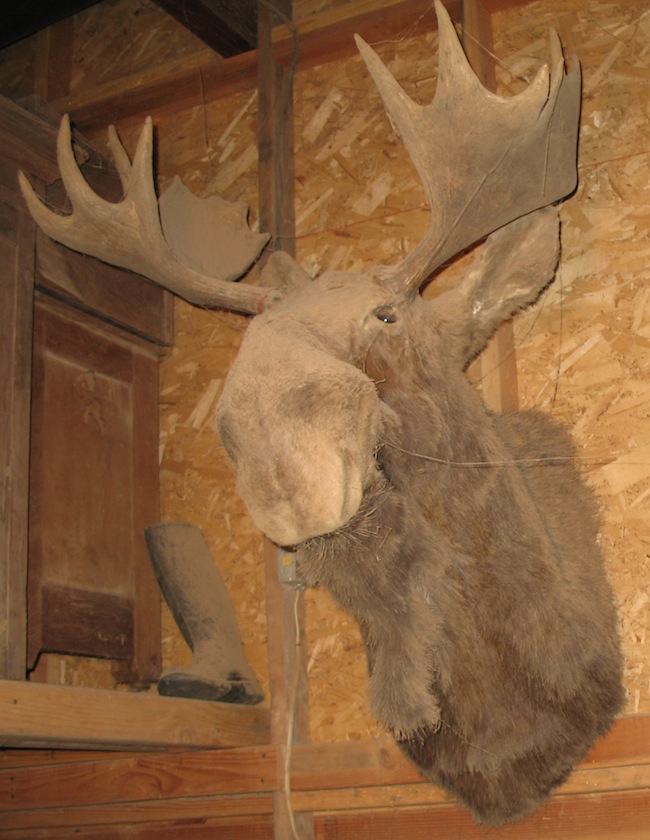 I work in “a relic zone.” My father bought this building in 1961, and I have worked here permanently since 1963. There are 10,000 stories here, but most are forgotten. One relic story that stands out and will never be forgotten by me, though, concerns the moose head.

When you look at it, you see a dusty, gnarly moose head. What do I see? Picture a beautiful new trophy on the wall of our family cabin on the San Lorenzo River. To me, it represents my father achieving his goal. In 1953, he went to Victoria, British Columbia, on his dream hunting trip. In preparation, he bought a brand new 1953 Dodge pickup truck, a new rifle, and other gear. He intended to shoot a moose, and he did. He was so proud he had the head stuffed. We celebrated and ate the meat for over a year; moose burgers are good.

Look at the head now, it’s a mess. 1955 was a bad year for our family. I was in the Navy, stationed aboard a submarine tender in San Diego, and I worked on repairing old World War II subs. One day that year, while I was working on a periscope, it was lowered on me by accident. Consequently, my injuries put me in the hospital for 6 months. That same year my father had his first heart attack (he had four more before he died in 1963).

Also in 1955, the San Lorenzo River flooded and washed away our cabin. The moose head was found buried in the mud. It was dug out and hosed off. When you look at it, you can see his nose is twisted, but he still has a gleam in his eye. It makes me smile. When children come into my shop and see the moose, they ask about it. I love to tell the story of my father’s hunting trip and the flood.

TaxidermyTaxidermy evolved out of the tanning trade, whose practitioners preserved t…