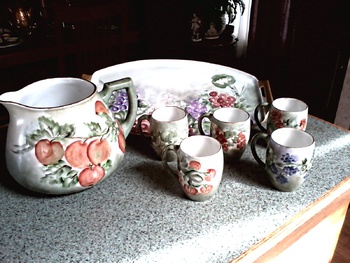 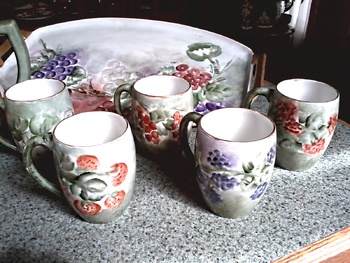 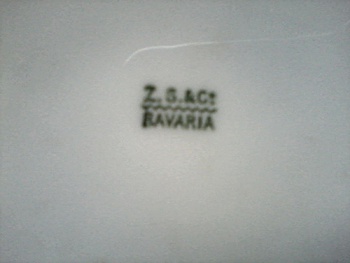 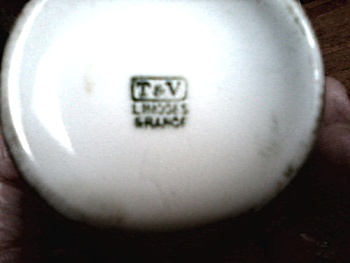 This set was sitting on a sidewalk sale table outside one of our GWs. I looked at it and went inside didn't find anything and went back outside and brought it back in and paid for it. I saw the marks but really didn't think anything about them. I just thought it was great deal for six bucks. I carried it across the parking lot with everything on the tray and gently put it in the trunk piece by piece. A little research online line shows these marks belong to the turn of the century. The cider pitcher "Zeh, Scherzer & Co." (1880 until 1910) and the Limoges cups are "Tressemann & Vogt "(1907-1919) The gold handled grape design painted tray is just marked Bavaria but probably from the same time period. They are all hand painted but are not a set per say. What this seems to be are blanks from different companies and hand painted by an amateur. This was a popular pastime for Victorian women and continued well into the 20th century. The five cups are painted with blackberries, red raspberries. gooseberries,currents,and strawberries. The pitcher is painted with what looks like peaches but I'm not sure. It's very pretty and works well together. Not a speck of damage either,just some light wear on the gold trim. It looks so nice it's hard to believe it's that old.
-Mike-

Porzellanfabrik Zeh, Scherzer & Co. (1880 until 1910)
The company 'Zeh, Scherzer & Co.' was founded in 1880 and directly started to produce a wide range of pieces including coffee and tea sets, normal household items and tableware as well as decorational porcelain. Items made by the company at a time also caught the eye of the 'Geo. Borgfeldt & Co.' company and during January 1907 and May 1908 'Zeh, Scherzer & Co.' produced a series of items exclusively for the company from New York, based on an agreement between Borgfeldt and Zeh who had met earlier. Being very successful in decorational porcelain, the company opened its own art department in 1908 and next to many other famous designers also Professor Fritz Klee (who later became director of the 'Königliche Fachschule' in Selb) was employed as advisor.