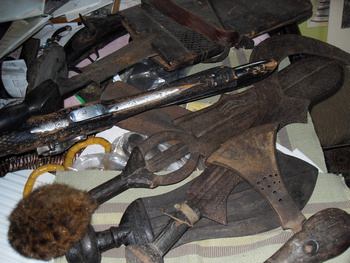 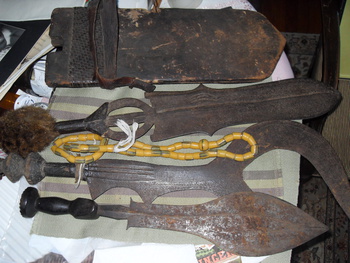 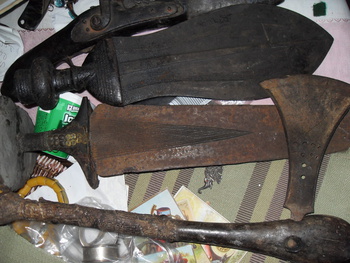 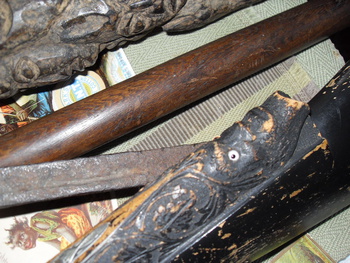 I collected these items during my extensive travels in Africa over the past 25 to 40 years. Included among these arms is a
spear from the Ivorian Coast, a few Congolese knives, and a long knife from Zimbabwe; just to name a few.

In the third photography displays plays a Songye's warrior axe, a fine Congolese warriors sword and a Kuba knife.
The Songye warrior battle axe, circa second half of the 19th century, is about 14 3/4 inches in length. It had a wood haff, an iron heal with hammered raised edged and step curved cutting edge.The blade shows original hammered finish and the wood had a dark patina handle that is wraped in snake skin.

In the first photo has a Congolese warrior sword, circa mid 19th century, has a handle of wood covered with leopard skin and a finely forged 16 1/2 inch blade with elaborately chiseled with lustrous brown patina all detailed crisp with a few scattered old pits as expected.

The kuba knife (in the third photograph), associated with the Poto Klan who are neighbors with Ngombo tribe of the Congo when they both lay claim to the Ubangi river.

In regards to the third knife, few African cultures can boast a history ad long as proud as the Kubu who lived along the Snakoru river. Their history parallel Great Zimbabwe and grew alone with Benin Kuba chief Shamba-Bolongongo. In about 1600 - 1620, he visited Benin and introduced the iconic kuba knife ikula which was subsequently represented in Benin as the proper society. The kuba is associated with royality.

The second image consist of two Congolese blades a wooden scabbard and a fine Nelala exexecutioner's sword. The sword, circa 1905, is 20 inches in length with a forged iron blade of particular fine workmanship. Both the blade and the handle possess thst dark brown patina.

The fourth and final photograph is of an antique Ivorian (Concul barbo) spear with a forged iron head with a large ofset section pointed over. The handle is handsomely carved with images of the tribal region. And there is also an image of a blunderbluss that bears a handle with a carved blackmoor with white glass eyes.