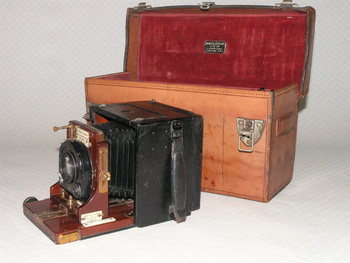 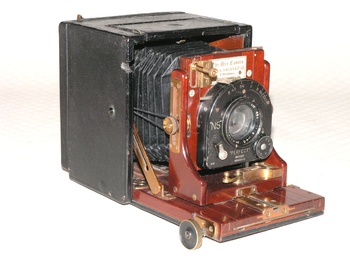 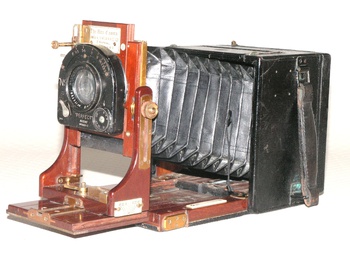 Sinclair & Co. Ltd, James A. | Una | 1926? | 2 1/4 x 3 1/4.
In the early 1900s, all British camera makers had to compete with the Houghton's Sanderson for the attention of the camera buying public, and various similar cameras were produced by several makers in the attempt to emulate the Sanderson's success. The Sinclair "Una" was probably the nearest rival to the Sanderson, because of its rigid design and quality construction. Standard, Tropical, and De-Luxe versions were available, with a range of lens/shutter combinations to order. This Standard version, dated by the label address at 3, Whitehall, where Sinclairs were from 1926, has the Ross 4 3/4 in. f/4.5 Xpres lens in patent "NS Perfect" shutter, a development of their earlier "Accurate".