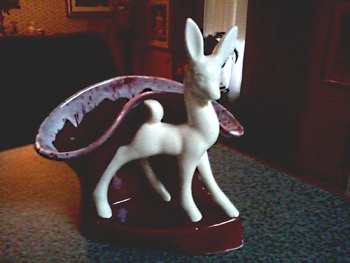 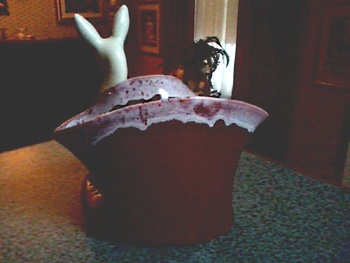 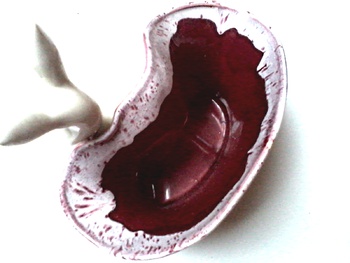 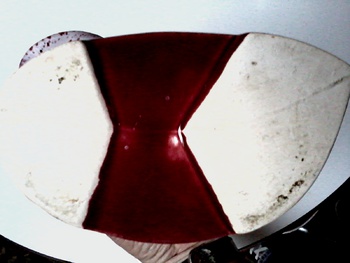 It wasn't a total wash today. Found this nice little deer and vase planter at the little GW training store. It's done in a really nice magenta color with a blue grey drip glaze accent on the rim. The little ivory colored deer looks great against the vases colors. Some drips and imperfections in the glaze but no chips or cracks. I kind of figured it was American bisque due to the wedge foot bottom as there are no marks or labels. Found a couple online with yellow and green vases with the same description. -Mike-

Many novice collectors are not very familiar with the American Bisque Pottery Co., but would almost certaintly have heard of McCoy Pottery Co. Yet, Am. Bisque was known as a giant, second only to McCoy Pottery, in the production of cookie jars!
American Bisque Pottery started in business in W. Virginia in 1919 and continued until 1982. It actually comprised an interaction of 4 companies not discussed herein.
Am. Bisque produced Kewpie dolls during WW1 because those dolls were prohibited from being imported from Germany during that time. Later, Am. Bisque expanded in production of lamps, planters and vases, novelties, and colorful cookie jars!
Most American Bisque was simply marked with an impressed USA mark, or a mold number and USA mark; some had circular stamps on them. The company also used paper labels, but I have never come across one yet! Many, but not all of the pieces have unglazed wedged feet on the bottoms. American Bisque is very heavy and well-made as most vintage American Pottery was and is. Some American Bisque items are cold-painted, meaning, the paint is applied after the item was glazed and fired. Cold paint has a tendency to flake or wash off over the years and is just part of the aging process on vintage pottery.