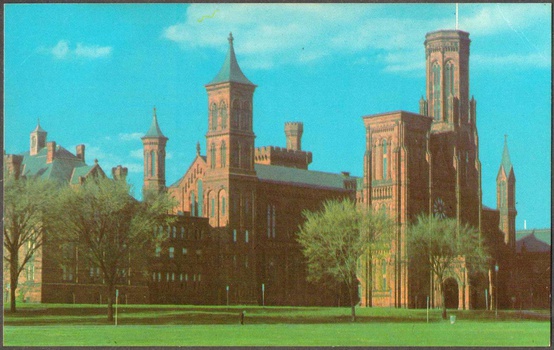 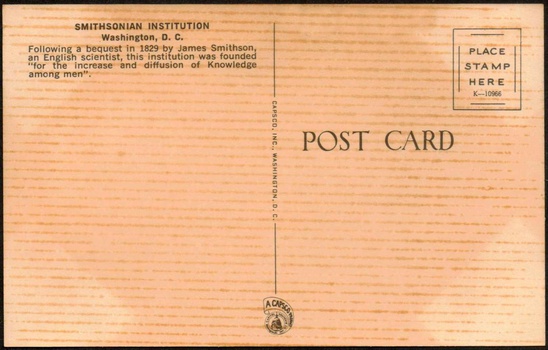 - Picture postcard of the Smithsonian Institution, Washington, D.C.
- Card# K-10966 / Printed by Capsco, Inc. Washington, D.C. (1976)
-- Following a bequest in 1829 by James Smithson, an English scientist, this institution was founded "for the increase and diffusion of Knowledge among men". - The Smithsonian Institution, established in 1846, is a group of museums and research centers administered by the United States government. - Originally organized as the "United States National Museum," that name ceased to exist as an administrative entity in 1967. - Termed "the nation's attic" for its eclectic holdings of 137 million items, the Institution's Washington, D.C. nucleus of nineteen museums, nine research centers, and zoo - many of them deemed historical or architectural landmarks - is the largest such complex in the world. - Additional facilities are located in Arizona, Maryland, New York City, Virginia, Panama and elsewhere, and 168 other museums are Smithsonian affiliates. - The Institution's thirty million annual visitors are admitted without charge; funding comes from the Institution's own endowment, private and corporate contributions, membership dues, government support, and retail, concession and licensing revenues.