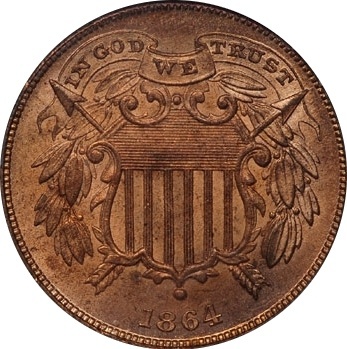 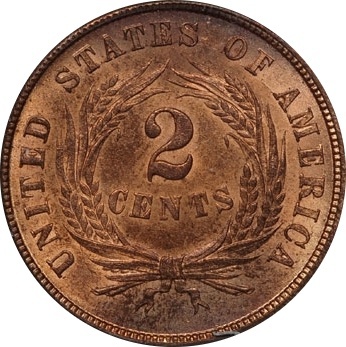 This is definitely one of my favorite coins in my collection. It is an 1864 2-cent piece of the "small motto" variety. The new 2010 "shield reverse" Lincoln penny sort of reminds me of this coin. (See an image of 2010 shield penny at: http://acdwyer.com/lincoln_cent_2010_shield_reverse.aspx)

Anyway, what I like about this coin is the history surrounding it.

The 2-cent piece was one of the shortest lived denominations of any U.S. coin. It was introduced in 1864 and ceased being produced in 1873. Its introduction was at the height of the Civil War during a period of extreme coin shortages due to hoarding. The example shown here is from that first year of issue.

Also, the 1864 2-cent piece is the first coin to bear the motto IN GOD WE TRUST. The motto apparently came about due to an increase in religious sentiment during the Civil War. In 1866 the motto was also added to the 5-cent nickel, quarter dollar, half dollar, dollar, $5 half eagle, $10 eagle, and $20 double eagle.

In 1956, Congress finally passed a law making In God We Trust our national motto and in 1957 it was finally added to our paper currency.

While none of the 2-cent pieces are considered a great rarity, the 1864 is actually the most common and available of all the dates. However, the "small motto" variety, like this example shown, is considerably rarer than its "large motto" counterpart.