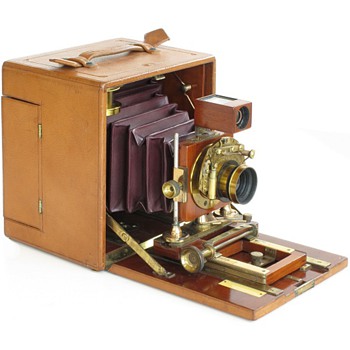 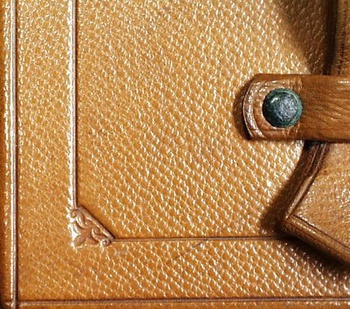 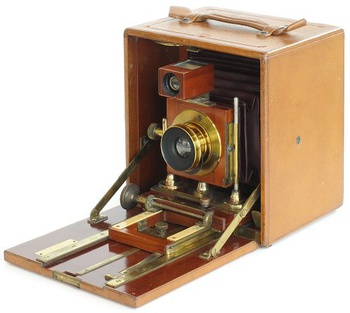 The 1890s American self-casing cameras were very popular and nearly all were made with black leather bodies. The American Optical Company and a few other manufacturers accepted special orders, but surviving examples are exceedingly rare. Years ago this special order c1896 Henry Clay Regular (4” x 5” format – which is rare unto itself) found its way into my collection.

Henry Clay apparatus is among my favorite American folding cameras. They are sophisticated, advanced amateur designs with amazing builds for production cameras. Yet their only flaw is really crappy outer body leather. Of the 30 or so known Henry Clay cameras of any model, only a few have good body leather.

This is an exception and nearly pristine; the only known factory version with brown body leather. The leather is thick and plush with beautifully detailed fleur-de-lis embossing. When first shown this camera I was skeptical that it was original. But the construction quality coupled with extensive research that uncovering an 1896 American Optical advertisement commenting about custom orders changed my mind. Today, I handle the camera with white gloves or a clean cloth to avoid skin oils getting on the leather.

This special order apparatus also includes two focusing scales; one for a standard lens and a second for a wide angle lens. The second lens screws into a mount inside the top of the body when not being used. A second image of the camera shows the shorter wide angle lens in place.

The owner of this "Regular" may have had an interest in taking a variety of picture styles including landscapes, street scenes, and action. For landscape and architectural work, the camera includes a Beck "Autograph" wide angle lens shown in the third picture.

Several dry plate-holders came with the camera and I actually shot pictures; but never found time to have the images developed.