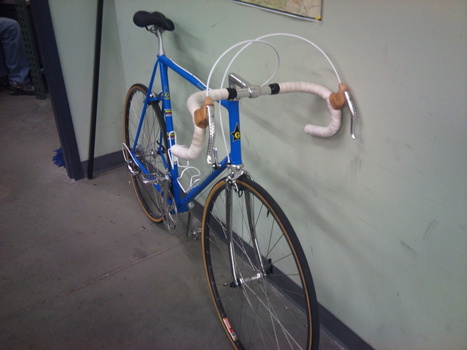 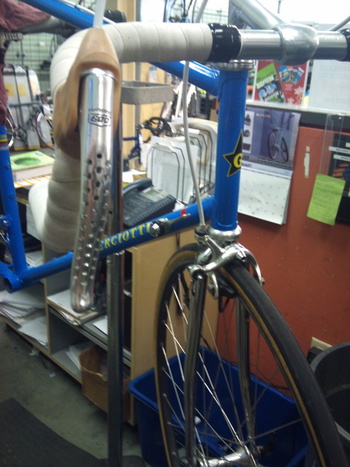 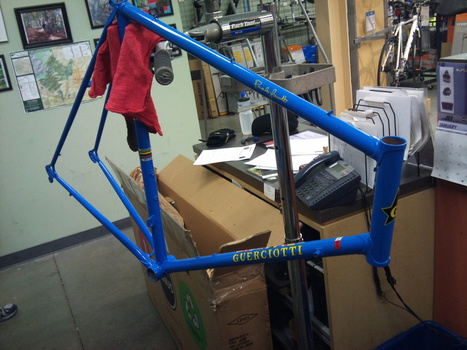 I was looking for a winter project, and i found this on ebay. It was a restored early 80's Guerciotti for sale. I couldn't resist so i picked it up and got to work.

Now i have been a bicycle mechanic for 22 years, so this bike looked to be a snap. Guess again. I had most of the parts allready but there were several non standard parts that i needed to scrounge for.

The bottom bracket was italian thread, not really the standard anymore. The seatpost was 27.0, again non standard size. Finding the horizonal drop out screws was a fun dive thru an old bike shop. Finally the seat post binder bolt i had to make up since i couldnt find a correct replacement.

I decicded to build it up with Shimano 600 EX, a parts group from the period and some of what i consider the nicest parts shimano ever made. I used a nice nitto stem and handle bar and the fantastic 600 EX non aero brake levers.

I was going to go with friction down tube shifters, but in the end i swapped out a set of dura ace 9spd levers and mated them to a 9 speed ultegra rear der. Yea its not period correct, but i want to ride this alot and i wanted better shifting than old friction 6 spd (feel free to argue here)(lol lol lol)

To finish i am putting on speed play pedals and a nice new terry butterfly mens saddle. I plan on putting a couple of thousand miles on it this year, and i wanted a bike that blended what i thought was the great about the old, and the advantages of the new. In the end i think i am going to be very happy with this steed. And anything that looks this pretty in the days of carbon everything will stand out anywhere i go.