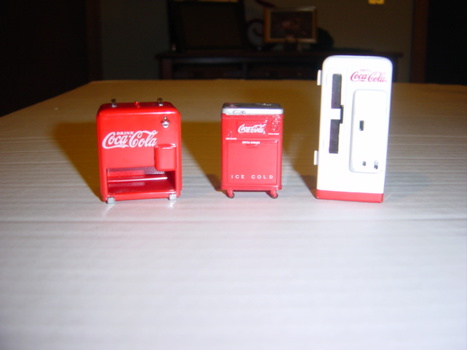 An interest developed to acquired three different 1/24 scale, metal die-cast, machines. I noticed that these units are not identified by the actual machine name or manufacturing year that they were modeled after. I thought some of you might like to have the mystery solved. I assure you that they are ID’d properly.
You can then setup displays that are year accurate, if you care. I do, so I set one up in the next posting.

The one on the left is distributed by The Danbury Mint and is a model of a 1937, +/- 1 yr., Coca-Cola Standard Ice Cooler manufactured by either Westinghouse in MA or The Cavalier Corp. in TN.

The one on the right is distributed by ERTL and is a model of a 1958, +/- 1 yr., CS-72 Coca-Cola vending machine manufactured by The Cavalier Corp. in TN.

These machines are supplied with die-cast Coca-Cola delivery trucks. As distributed the truck year and the machine year do not necessarily coincide.

Enjoy and have a good one.
Ted