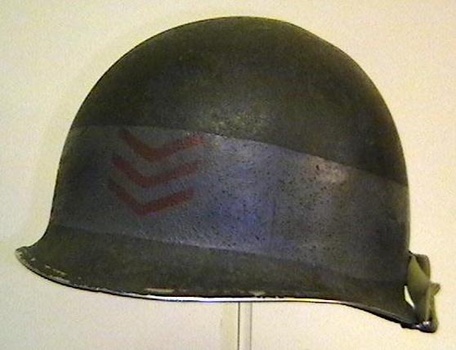 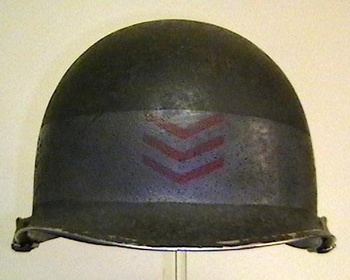 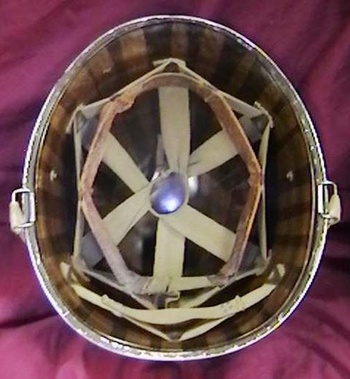 This original U.S. Navy M-1 helmet was a diamond in disguise. I wanted to branch out from collecting WW II militaria, so I thought I would start collecting Vietnam militaria since this area is more affordable. I knew nothing about U.S. helmets at the time. I found this helmet in Michigan at a small antique store.

The helmet had a Vietnam Mitchell cover on it and it was very cheap. I bought the helmet without taking the cover off. I got home and took off the cover and saw the red chevrons on a wide painted grey band all around the helmet. I went online and started to look up Vietnam used U.S. helmets. This helmet looked nothing like the ones I saw. The color was different, the liner different, and why were there red chevrons and a grey band on the helmet? The owners name was stencilled on the reverse side of the sweatband along with a serial number which was partially worn away. With a little more research I realized that I had a WW II Navy helmet.

I was now disappointed that I did not have a Vietnam era helmet. Almost a year later by chance I saw a picture of a landing craft driver on D Day wearing the same type of helmet. With a little more research I found that this indeed was the type of helmet used by Navy personnel on that historic day.

To be sure, I brought the helmet to a military show to have others examine it. After several people familiar with U.S. helmets looked it over, it was agreed that it was genuine. One made an offer which I declined, for I decided to be the keeper of this important piece of WW II history, at least for a while.