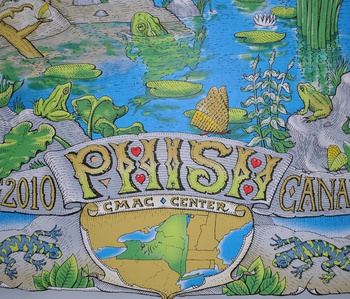 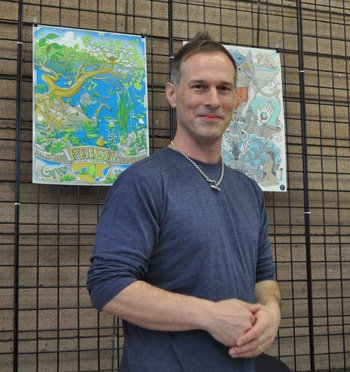 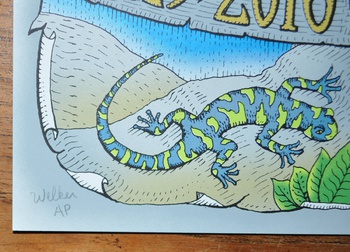 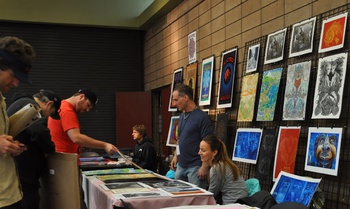 This weekend I worked as a volunteer at Flatstock 25 - By the Bay, which was co-produced by The Rock Poster Society (I am a card-carrying member of trps dot org) and the American Poster Institute. The show was held at the Hall of Flowers in Golden Gate Park on Saturday July 10, 2010.

I mostly collect old Fillmore and Avalon postcards, but every so often I spring for a poster. For this show, I knew I wanted one poster in particular, so I stopped off at the cash machine on the way to the hall, just in case the poster in question was there.

It was. The poster was created by an artist from NYC named David Welker for a Phish show on 6/29/10 in upstate New York. Burlesque of North America did the screen printing (6 or 7 colors in the run, plus hand detailing in Sakura gold metallic and other inks for a total of 10 colors), the edition size was 550, and the 18-by-24-inch poster was printed on heavy French paper. David told me he was given the commission with just three week's notice. Think about that for a minute...

Phish is one of several bands that is well-known for commissioning posters for its shows, which fans usually snap up at the event. Often these posters, which routinely sell out at the concert for $50 each, are for sale the very next day on eBay, often for double the previous day's retail price.

What made Phish's June tour interesting to me is that very few posters seemed to follow this rule. Truth told, I thought most of them were kind of lame, and I guess the poster community did, too; very few made it to eBay, and only a few of those sold briskly.

Then Welker's poster appeared, and the thing just blew up. According to ExpressoBeans dot com, which tracks this kind of data, 21 of Welker's Phish posters sold between 6/30 and 7/9, at an average price of $178.07.

In this case, I just really liked the image, so knowing that Welker would be at Flatstock 25 - By the Bay, I hoped he'd have a few copies with him.

He did, and boy am I glad that I was able to purchase a signed artist proof from him at a regular price before the crowds got there (the benefits of volunteering, I guess). Welker is a sweet guy (that's him in the second photo from the left), and a terrific artist, so it was gratifying to see the first people in the door, including a well known San Francisco poster dealer, make a bee line for his table (that's the small crowd at his table in the photo on the far right). I think the handful of proofs and the few numbered copies he had were gone in 10 minutes, perhaps less.

Will I flip mine to make a quick buck? Not a chance, so don't bother asking; it's already framed and on my wall.