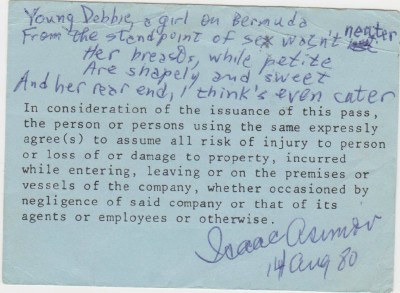 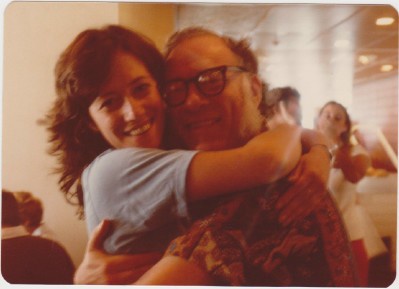 The "Young Debbie" ditty was written on the bus pass, while sitting behind me, and next to his wife, Janet Jepson, during a trip to our group's viewing site. This was during my second trip to Bermuda and every time I bent over the telescope to look at the sunspots, I got a pinch on my butt. This was followed by Janet, with her sun umbrella, saying, "Will you leave that poor girl alone?". She really felt sorry for me! Those two were Love Birds; no matter how many times he pinched me!

Fellow Nerds, I worked 2 jobs, at 18, and paid for programming school. No vacation for years (1970 grad) until I found an ad in Astronomy magazine for a trip to "Astronomy Island"; Bermuda. Took this trip 3 times with a great bunch of people, first 2 with Isaac. Our group was able to set up our equipment on an estate on the south side of the island and Isaac gave a riveting lecture about Neutrinos.