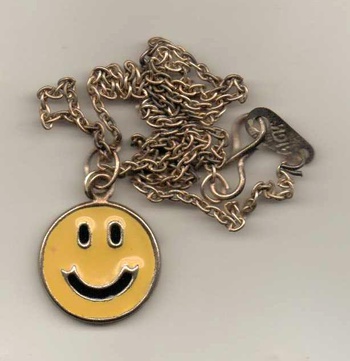 This is a vintage early-1970's Smiley Face charm necklace with a 18" chain
Yellow and black enamel on pressed tin / Made in India --- A smiley face is a stylized representation of a smiling humanoid face, an important part of popular culture. The classic form designed in 1963 comprises a yellow circle with two black dots representing eyes and a black arc representing the mouth. The original rendition was designed in ten minutes in 1963 by Harvey Ball, an American commercial artist, for an insurance company to raise moral upon its employees. His rendition, with bright yellow background, dark oval eyes, full smile and creases at the sides of the mouth, was imprinted on more than fifty million buttons and was familiar around the world. The design is so simple that it is certain that similar versions were produced before 1963, however Ball’s rendition, as described here, has become the most iconic version. The graphic was further popularized in the early 1970's by Philadelphia brothers Bernard and Murray Spain, who seized upon it in a campaign to sell novelty items. The two produced buttons as well as coffee mugs, t-shirts, bumper stickers and many other items emblazoned with the symbol and the phrase "Have a happy day" and also "have a nice day". Some 50 million happy face badges were produced by 1972.