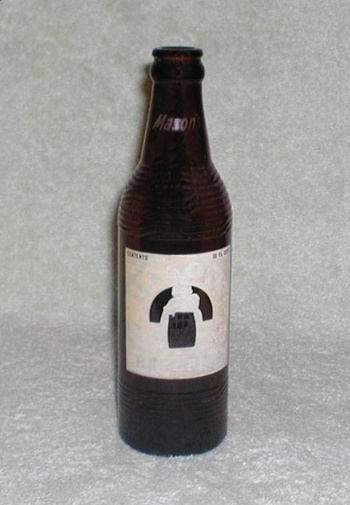 This is a 1952 Mason's Root Beer Bottle. - Most of the original label color (should be bright yellow & red) is gone leaving only the white base and the Mason's name on the neck (which also would have been yellow) is barely visible. There is some print left on the back which says 'Bottled under Authority of Mason & Mason, Inc., Chicago, Illinois'.
- The bottle is embossed on the bottom with the Thatcher Manufacturing Co. mark and
10 fl. oz. / 2572 / bottle code 'S' and 52 for 1952. / brown glass, ribbed
** Mason's Root Beer was first manufactured in 1947 by Mason & Mason, Inc. of Chicago, Illinois. - During its early years, Mason's Root Beer and flavors line were widely distributed in the Midwest as well as some Southern states. By 1978, Mason's Root Beer had been acquired by Monarch Beverage Company but was mostly shelved in favor of the higher-volume Dad's brand of root beer, which Monarch acquired in 1986.