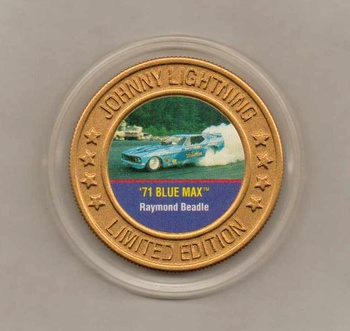 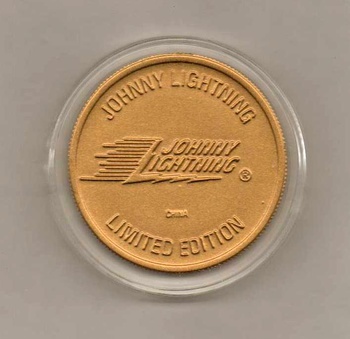 This is a plastic disk which was included with the Johnny Lightning
'71 Blue Max Mustang 1/64 scale die-cast car - 37mm diameter
** Johnny Lightning is a brand of model cars originally produced by Topper Toys from 1969 to 1971 similar to the Mattel Hot Wheels die cast racing cars. The Playing Mantis company acquired the rights to the Johnny Lightning trademark and started producing reproductions of the original cars in 1994. - The Blue Max first appeared at the 1970 NHRA Winter Nationals on a Ford Mustang Funny Car owned by Harry Schmidt. Raymond Beadle bought out Schmidt in 1975. This die-cast car was issued in all three funnycar paint schemes. - Circa mid-1990's