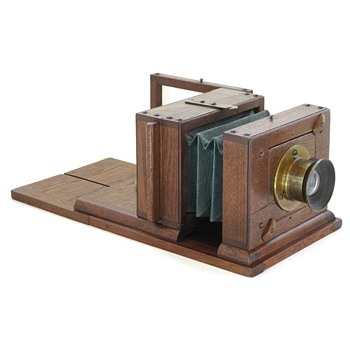 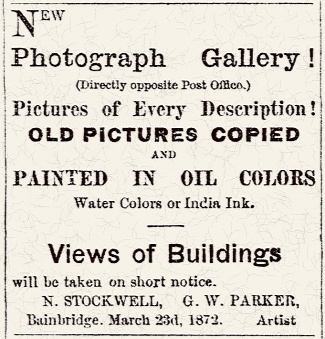 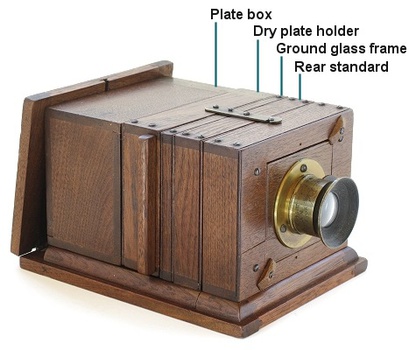 Sometimes you regret the ‘one that got away’ ... you know what I’m talking about. Either you missed an opportunity completely or didn’t bid high enough in an auction (and so forth). And if the item was to fill a hole in your collection, it gnaws at you for years. This unique example of a c.1875 view camera made by Nathan Stockwell (Bainbridge, NY) was one that got away.

It appeared on eBay sometime in 2003. The seller’s pictures were awful yet one other collector (a friend) and I saw the potential of this camera being a truly iconic piece. So we bid. Knowing the other bidder quite well I knew that chances of winning were futile and resigned myself to a loss. Seven years later the camera was offered to me and the Stockwell is no longer in “the one that got away” category.

It’s a small 4” x 5” American field camera made of walnut (very unusual) with screws reinforcing the joinery. There is a nice flourish of shape between the body and base giving the camera a bit of style. It is also a system camera (image #3) that could piggyback accessories atop its solid bed. Add in the marvelous blue-green pebbled bellows contrasting the brown walnut color ... oh my!

For those of us into early gear, most any 1870s American camera has a mystical appeal. The ‘70s was transitional time of photographic technology in which dominant wet plate chemistry started giving away to a more convenient dry plate process. At the same time, the classic tailboard field body pattern (fixed front with focusing rear) was being refined into the popular design synonymous with the 1880s and 1890s.

Major American makers such as Anthony, American Optical, and Scovill were familiar names but enterprising builders also tried their hand at camera manufacturing during this decade of change. Enter Nathan Stockwell and George W. Parker; two entrepreneurs who opened a photograph gallery sometime in early 1872 in the small town of Bainbridge, NY. The gallery itself was short lived and according to a Bainbridge historian, the gallery was advertised in the 1872 issues of the Bainbridge Republican but not listed in the May 1871 or 1874 issues.

So here it is, the only known camera made by Nathan Stockwell; patented, professionally built and stamped with a maker’s I.D. and serial number. Where are his other cameras? No one knows.