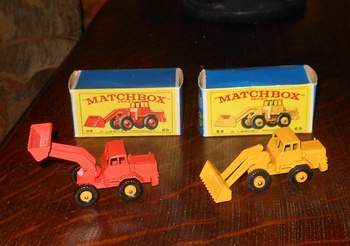 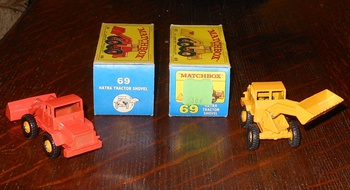 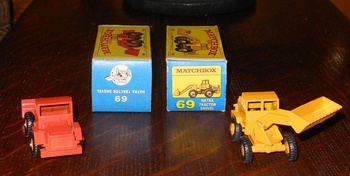 Just got the orange one and decided to make this a two for one. This model was first released in 1965 in the orange color with orange hubs and gray wheels. Soon they switched to black wheels and orange hubs. This was all within the first year of production. By 1966 it was yellow hubs.
In 1967 it was yellow with yellow hubs. Anyway the orange model here is from 1966 and the yellow from 1968. Both are in what are called E style boxes although as you can see there is a difference between the E style boxes end flaps.
Note I left the price tag on the one box. It was on clearance sale as the normal price would have been 55 or 59 cents. It is part of its history and removing the price tag just leaves an ugly scar on the box.