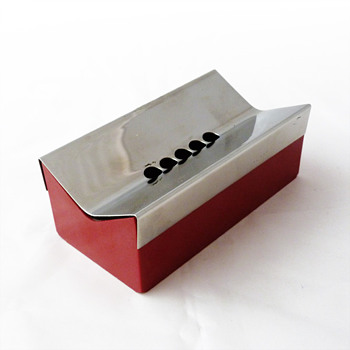 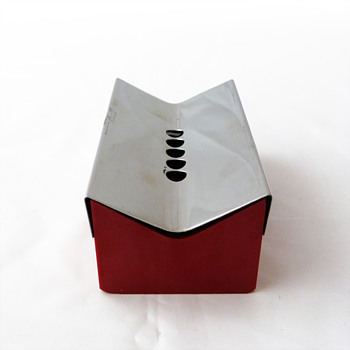 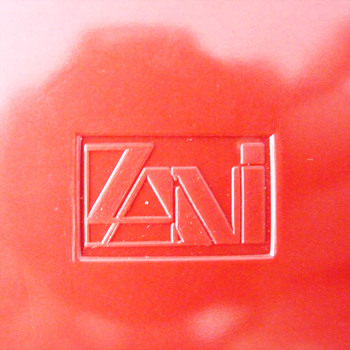 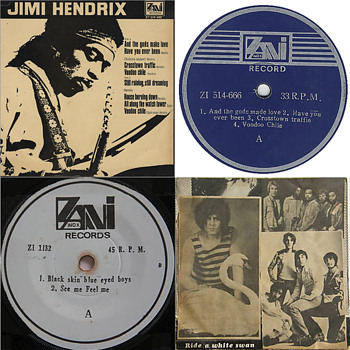 This ashtray is a bit of a mistery. I purchased in Barcelona, at one of the best design shops in town. We were there last March and Carlos wanted to take me to this huge design shop where they had had a clearance sign for years, but this time it was for real: there was a "last days sale" sign outside and no more than 200 hundred items remained inside. Amongst them those we bought for close to nothing: this ashtray, a couple of Rosti mixing bowls and a whole set of 6 Harri Koskinen designed meat knifes and forks.

It's the typical plastic and metal design from the 1970s -even late 1960s-.
The ashtray, which by the way was sold as a pencil holder... so strange :)- has got a ZANI stamp on the base. I know there is a Serafino Zani brand for stainless steel goods, but I've been unable to find this design among their goods, modern or old. What I've found is a lot of records with the ZANI INOX RECORDS label... just like the one on pic. 4. It seems this ZANI INOX RECORDS released music in Malaysia and South Africa (as far as i can tell, but I'm sure we can find Zani records released for other countries) around 1970 and used the same logo that can be seen on the ashtray's base. My guess is that it was an Italian brand -like the Steel company- and released records in countries that at the time didn't had the means or the freedom torelease them themselves.

I wrote Zani & Zani about the ashtray and they've so kind to answer me! Here's what they said in their letter:

"You are correct: the ZANI logo you have on your ashtray is our (ZANI&ZANI) old logo.

This ashtray you have is one of our historical product, was designed for us by the designers Carla Nencioni and Armando Moleri and it’s called model “5B” (means 5 holes).

At the beginning, we were ZANI with the logo you find on the ashtray, then, when the other company (Serafino Zani) started, as they did not have anything to do with us but they have the same surname, we changed the name and logo in ZANI&ZANI in order to avoid confusion"