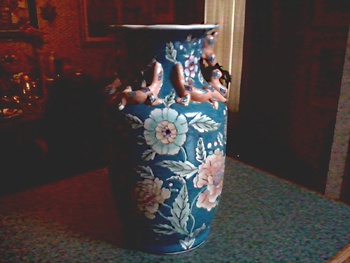 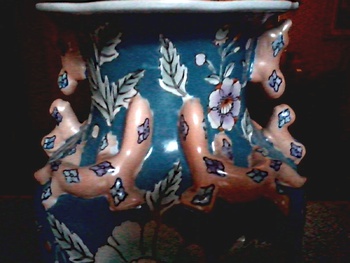 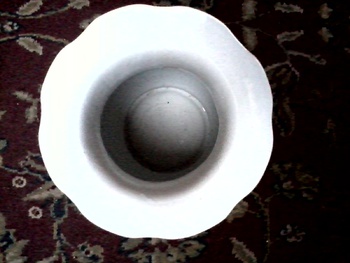 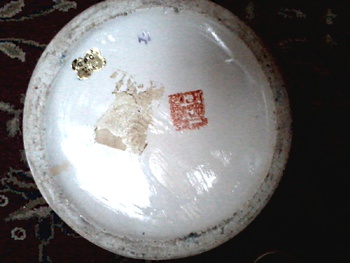 This was at our local GW. I liked the salmanders on this 14" vase and the bottom didn't say "Made in China". It has a spurious and very blurry red mark which means nothing. There is also a gold foil label that says "CPC Made in Macau" which is basically China anyway. Still a beautiful vase from the 60's or 70's. -Mike-

Here's what Gotheborg's site has to say about these pieces:

Marks on 'Macau Style' Decorated Porcelain
All from c. 1965 and later

The background as to how these pieces came to be is probably to be found in the difficulties that were met within China proper during the Cultural Revolution 1965-1975, when also much porcelain decoration and trade moved out to Hong Kong and as it seems, Macau.
The reason I have decided to call these special pieces "Macau style" is that some porcelain pieces have been found with a "Macau" sticker and some with the name Macau actually added to the mark.
There is as always a conflict between marks and reality and some "Macau" pieces do seems to come with a "Hong Kong" mark too. Geographically it is actually not far between either Canton, Macau or Hong Kong located in the Pearl River delta in the Guangdong province of China however politically, the difference in the last quarter of the 20th century was considerable.
The style of the "Macau group" is however easily recognized by its slightly "un-Chinese" style of decorations and its often pale enamels. It would be great if someone with any knowledge of where this porcelain were made or decorated could contact me about this and tell.
Until further, I have decided to group these marks and pieces, decorated in this peculiar style under one headline, to make it easier to study and identify them.