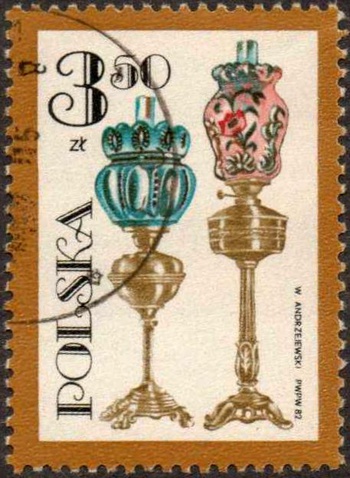 This is a commemorative postage stamp out of a total series of six issues from Poland to commemorate "Ignacy Lukasiewicz - Oil Lamp Inventor".
The first stamp depicted his portrait and the balance of five issues depicted various oil lamps. - **See below for more information on Lukasiewicz
- Cancelled Collector Issue with original gum (unused)
- Complete series issued March 22, 1982 - (only have one from the series)
-- Scott catalog# 2511 -- Denomination: (3.50) Zloty / "Oil Lamps"
** Jan Józef Ignacy Lukasiewicz (1822-1882) was a Polish pharmacist and petroleum industry pioneer who in 1856 built the world's first oil refinery. His achievements included the discovery of how to distill kerosene from seep oil, the invention of the modern kerosene lamp (1853), the introduction of the first modern street lamp in Europe (1853), and the construction of the world's first modern oil well (1854).