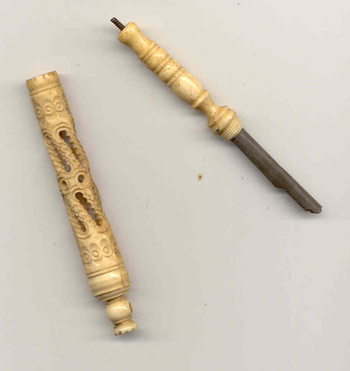 I no longer have this pen, but would still be interested in any information anyone would like to share. It is actually a pen nib holder. I have dated it to before 1900 (or whatever year it became illegal to use real ivory) If you look a the one end, there is a ball with a hole in it. If you look through the hole you saw tiny pictures of attractions in Atlantic City. One is Lucy the Elephant that is now in Margate, NJ and several other early buildings. I know that my grandfather vacationed there as a very young man. (I have a postcard he sent to my grandmother in 1904, before they were married.) He lived in Baltimore.