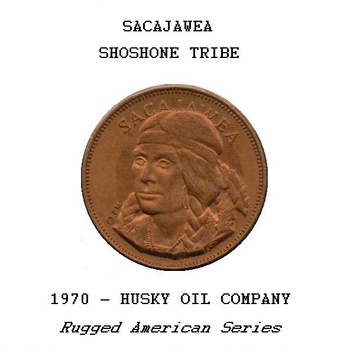 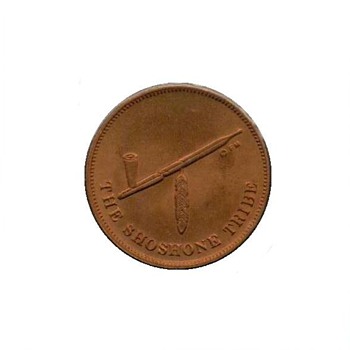 - 1970 "Rugged American Series" bronze token / Husky Oil Company
- Minted by the Franklin Mint for the Husky Oil Co. / (13 in series)
- "Sacajawea " / (1") in diameter / bronze / uncirculated condition
- Obverse: Sacajawea / Reverse: The Shoshone Tribe - Peacepipe
- In 1970, Husky Oil Co. would give out these "Rugged American" tokens upon purchases made at their gas stations. - Also provided was a cardboard game board with cut-outs so these could be pressed into the corresponding slots.
** Sacajawea, was a Lemhi Shoshone woman, who accompanied the Lewis and Clark Expedition, acting as an interpreter and guide, in their exploration of the Western United States. She traveled thousands of miles from North Dakota to the Pacific Ocean between 1804 and 1806.