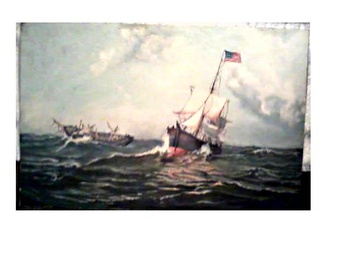 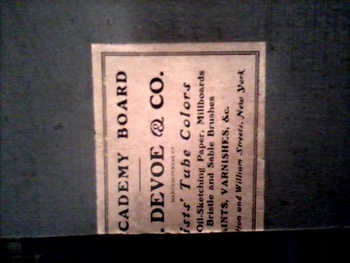 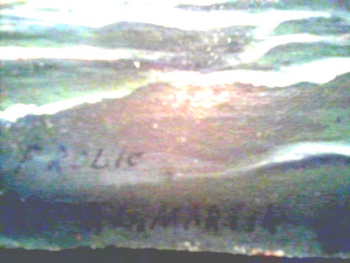 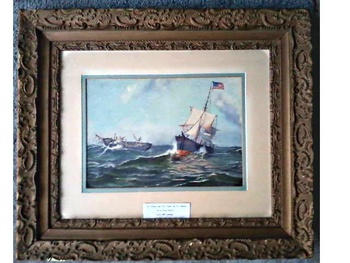 Every once and a while I find a surprise waiting on a Monday morning. The GW in Avon had carts of items ready to put out. One had pictures in it. This little piece of unframed 18" x 12" artist's board was among the framed larger pictures. I love paintings of ships and I knew this was a real oil painting. Beautifully painted by an artist that really knew his stuff. Don't know how this slipped by the processors. They probably figured it was a fake oil print. I new the label indicated old. I have another picture with this same tag. F.W. DeVoe used this label around the mid 1800's on their art supplies. The board was cut to size so part of the tag is missing. It says :
Artists Academy Board Trade Mark F.W. Devoe & Co. Manufactures of Artists" Tube Color Canvas Oil-Sketching Paper, Millboard, Fine Bristle and Sable Brushes, Pains, Varnishes, Etc. Cor. Fulton and William Sts., New York. The painting is of the famous sea battle between the "Wasp " and the "Frolic" during the war of 1812. It's signed and titled at the very bottom. Hidden in the waves and written in blue paint. It's almost invisible and says. The "Wasp" and The "Frolic" D.L. Martin. Not too sure about the D.L. part. Every time I look at it they seem like different letters. The initials are really obscured by the blue of the waves. I've not had much luck finding any info even with the artist's name. Martin is a very common name. I had an old gilt frame that had a mirror in it which I removed. Another old frame provided the glass and the matte. The painting was an odd size but the matte was 18 x 20 same as the frame. It crops the picture a bit but gives it more focus. So "voila" instant museum piece ! -Mike-

The clash between USS Wasp and HMS Frolic (18 October 1812) was one of a number of American naval victories early in the War of 1812, but soon after the battle the Wasp was captured by a British ship of the line.
HMS Frolic was an 18-gun brig-sloop (sixteen 32 pound carronades and two 6 pound long guns) that by 1812 had been in the Caribbean for five years. Her crew had been reduced to 92 men and 18 boys by a combination of malaria and the low priority given to the Caribbean theatre at this stage in the long war with France. In the autumn of 1812 Thomas Whinyates captain of the Frolic, finally received orders to return to Britain as the escort to a convoy of fourteen merchantmen heading home from British Honduras.
USS Wasp (the first of three ships to carry that name during 1812-13), was also an 18-gunner, in this case a ship-sloop, armed with sixteen 32 pound carronades and two 24 pound long guns. Her captain, Jacob Jones, had set sail from Delaware Bay on 13 October with a crew of 168.
The Frolic and its convoy were plagued by bad weather. On 16 October they ran into a hurricane. The convoy was scattered, while the Frolic lost its main yard arm and suffered serious damage to her sails. The next day was spent carrying out repairs and waiting for the ships of the convoy to reappear, but by the end of 17 October only six of the fourteen ships had rejoined the Frolic.
On the morning of 18 October the Wasp found the damaged Frolic and her convoy. Captain Whinyates attempted to gain some time by raising Spanish colours. The Wasp approached to within sixty yards, then hailed the unknown ship. At this point the Frolic raised British colours and opened fire with muskets and her carronades. The Wasp returned fire.
At first the British had the best of the action, damaging the American rigging, but before the crew of the Frolic could take advantage of this, her own remaining sails were shot away, leaving her a hulk. The Wasp was able to take up a position across the Frolic's bow, and for the next thirty minutes a very one sided duel was fought, with the Frolic exposed to the full American broadside but only able to respond with one gun. Eventually the Americans boarded the Frolic and captured her without a fight.
The Frolic suffered nearly 50% casualties during the battle, losing 15 dead and 47 wounded. The Wasp only lost 8 dead and 8 wounded, most in the early part of the battle.
The American triumph was short-lived. On the afternoon of the same day the British ship of the line HMS Poictiers appeared on the scene. Normally the Wasp would have been able to escape from the slower ship of the line, but on this occasion she was effectively shackled to the Frolic, and no resistance was possible. The Wasp was taken into the Royal Navy, where she served on the American coast as the Loup-Cervier. She was lost with all hands during 1815, the year after the same fate befell the second American warship to carry the name Wasp, lost in September 1814.
The two commanders were both well treated after the battle. Captain Whinyates remained in command of the recaptured Frolic. He faced a court-martial for the loss of his ship, but was honourably acquitted. Captain Jones and his crew were rewarded with $25,000, the captain was issued a gold medal and each of his crew a silver medal.