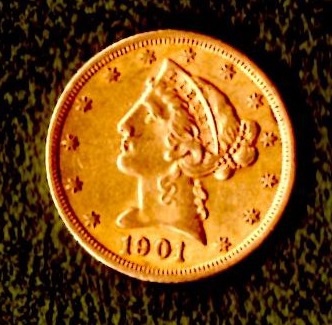 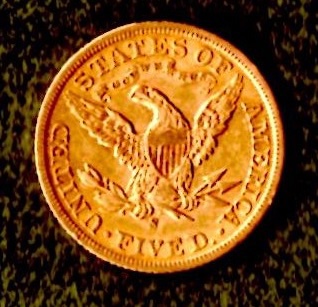 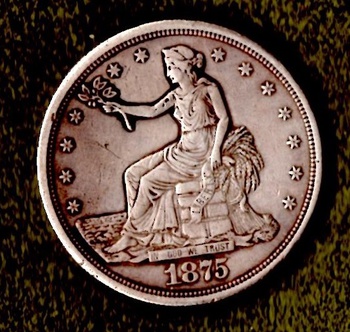 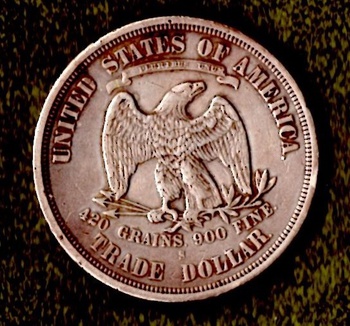 In addition to the huge jar of pennies I posted earlier, I’ve also gone through two smaller jars of loose mixed coins and an old makeup suitcase packed with old coin albums, coin rolls and nice old coins carefully wrapped in tissue. Of all of them, these two are the really big finds (and are now getting locked in my huge gun safe, not a suitcase in her basement!)

First is a 5 dollar gold piece dated 1900, S-mint. It's about 7/8 inch across. When my now 85 year old mother was only 15 years old, she baby-sat for a neighbor who was a banker. Apparently she baby sat for them for quite some time, and did other things like making a baby blanket for the child as a gift. Finally when my mother’s family had to move away, the neighbor gave her this five dollar gold piece as a parting gift, explaining that it was uncirculated and giving her instructions not to let it get rubbed or scratched.

Second is an 1875 S-mint Trade Dollar. It's about 1 1/2 inch across I’m not a coin collector, but from what I learned from the internet, I would guess this is “Very Fine.” Also from what I have read on the internet, these were used for foreign trade in places like China, and it’s marked with its silver content “”420 GRAINS .900 FINE.” When my mother was in her early 20s, she was a cashier in a grocery store. One day a woman came in and bought bread and milk. At the register she said “I’ve been keeping this dollar because it has my grandmother’s birthdate, but now I need milk and bread for my children more than I need this dollar” Mom accepted the dollar at its face value, and later got permission from her boss to “buy it from the till” (replace it with a dollar of her own).