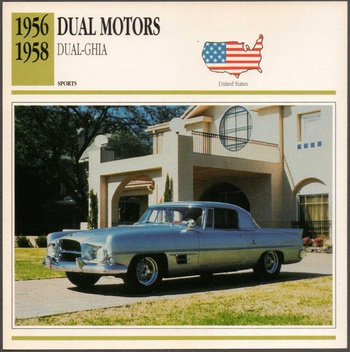 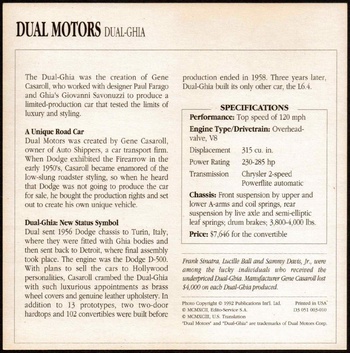 - Vintage Car Card from Edito Services - ©1992 - 5 7/8" X 5 7/8"
- 1956-1958 Dual Motors Ghia (United States) - Top speed of 120 mph
- Dual Motors was created by Gene Casaroll, the owner of a car transport firm. When Dodge exhibited the "Firearrow" in the early 1950's, Casaroll became enamored of the roadster styling. When he found out Dodge would not produce the car for sale, he bought the production rights and set out to create a unique vehicle. He sent 1,956 Dodge chassis to Turin, Italy, where they were fitted with Ghia bodies and then sent back to Detroit, Michigan, where final assembly took place. The engine was the Dodge D-500, a 315 cu.in. with a power rating of 230-285 hp, mounted to a Chrysler 2-speed Powerflite automatic transmission. The car sold for $7,646 for the convertible, much under-priced since Casaroll basically lost $4000 on each Dual-Ghia produced. Some of the lucky individuals who received this short-lived production model were Frank Sinatra, Lucille Ball, and Sammy Davis, Jr., and Richard Nixon. Also, Desi Arnaz owned one, but he wrecked it. Ronald Reagan also owned one, which he lost in a high-stakes poker game with then-President Lyndon Johnson, who kept the car for several years. Dean Martin had one at one point as well, and can be seen driving his Dual-Ghia in the film "Kiss Me, Stupid". - Of the total 117 cars produced from 1956-1958, 32 still existed as of July 2006. A 1957 convertible model sold at auction in 2013 for $495,000