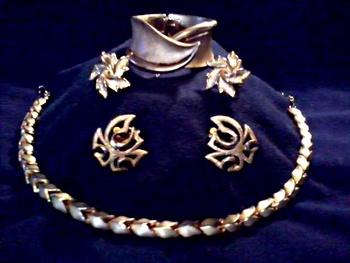 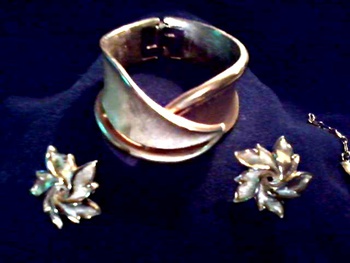 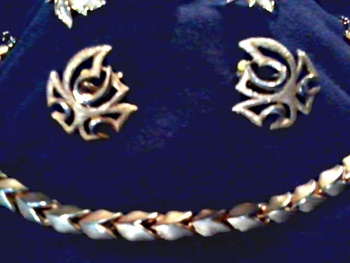 I've collected these pieces from various thrift's over the last few months. I found the spring loaded cuff bracelet a few weeks ago at our old local Salvation and thought the leaf theme matched a few other pieces I had. There are two sets of clip on's that I thought were good candidates. I'm leaning more toward one pair than the other. Which do you think would make the nicest complete set ? I'm sure there are some better matches out there but for the time being..... -Mike-

Excerpts from "Irving Wolf and Trifari, A View from the Top"
Courtesy of trifaricollection.com

When 25-year-old Irving Wolf joined Trifari in 1940, he probably had no idea that he would be its CEO by the time he retired in 1981. Prior to joining Trifari, he held a number of non-engaging jobs that he describes as "folding towels at Macy's and slicing baloney". His first job with Trifari came at the suggestion of his father.
Costume jewelry collectors and scholars have long been entranced by the fabulous designs that Alfred Philippe created for Trifari. Fans of his designs may have imagined that the man matched his creations in elegance and style, in the mode of Yves Montand, for example. But this was not the case. According to Irving Wolf and his wife, Ruth, Mr. Philippe was a short, chubby man with a black mustache and a thick French accent, closer in appearance to Alfred Hitchcock than the aforementioned Yves Montand. Mr. Philippe had come to Trifari from the world of fine jewelry, and brought this heightened sensibility to his costume jewelry designs. Even though, in most cases, his name appears on the patents, the design department was definitely a collaborative effort, and credit should be given to the other talented designers that worked with Mr. Philippe. Jean Paris worked under Mr. Philippe, and Andre Boeuf, who worked under Mr. Philippe starting in 1955, took over when Mr. Philippe retired in 1968.
The designer Diane Love worked with Trifari for about 3 to 4 years in the 1970's. She had earned a PhD in Art History at Columbia University, and was entranced by the art and artifacts that she saw in her travels. These were the inspiration for her designs that were manufactured by Trifari. Her designs were made in small quantities of 50 to 300 pieces. The pieces did not bear Diane Love's name. They did originally come with paper hangtags with her name. When asked about the collaboration between Trifari and Diane Love, Mr. Wolf characterized it as difficult.
One of the most significant pieces of information gleaned from Mr. Wolf will, hopefully, correct the widely held belief that Trifanium is the name for a special plating invented by Trifari. According to Mr. Wolf, and corroborated by Trifari plant manager, Alex Metcalfe (who took over from Gus Trifari), Trifanium is the name for a special alloyed casting metal used by Trifari to create the cast pieces for their jewelry. The Trifanium castings were then filed, polished, and plated.
Trifari developed its own plating solutions for both gold and rhodium colors. The gold plating solution contained real gold and was applied much thicker than industry standards. While some gold jewelry had a finish 1 millionth of an inch thick, Trifari's was 8 millionths of an inch thick. Rhodium, a rare metal found in conjunction with platinum ore, is difficult to work with but it provides a beautiful, non-tarnishing finish. In fact, it is sometimes used in the industry as a plating over sterling silver because of its non-tarnishing property.
Trifari felt that their plating solutions were superior to others on the market, and made them available to other jewelry companies. Rather than keep these solutions to itself, Trifari was more interested in raising product standards for the industry as a whole. Some of the companies that Mr. Wolf recalls selling these plating solutions to: Speidel, S. Rappaport Co., Brier Mfg., and Napier.
These plating solutions were quite expensive, which led to some nefarious activity by one customer's employee. Each bottle of plating solution had a unique stock number attached to it, and complete records were kept of every bottle sold. It came to the attention of Mr. Wolf that one customer's orders had doubled over the course of a year, so he called to investigate. He was informed that production had not increased, and so there was no logical explanation for the increase in plating solution purchases. Mr. Wolf devised a "sting" operation where someone was sent out to buy bottles of plating solution on the open market. The bottles purchased turned out to be ones that had been sold to the suspect account. An employee had been siphoning off the extra bottles and selling them on his own.
Trifari is responsible for some of the designs most coveted by serious vintage costume jewelry collectors. In particular, the pieces created during the period when Alfred Philippe led the design department. Mr. Wolf was privileged to be a part of this creative, and socially responsible, company, and we are privileged to learn about his experiences with the company through this interview.